In On the Rights of Molotov Man, though it mainly focuses on two forms of art of Molotov Man – the original photo from Susan Meiselas and the painting inspired by the photo by Joy Garnett, I cannot stop noticing that there are also other forms of adaption of the Molotov Man. It is truly a thousand possibilities. Typing in “Molotov Man” in Google Images, I find countless images of Molotov Man, or its adaption. In the digital age as we are in right now, it is inevitable that there may be more than one form of a single art work. People may say that art work does not have a nationality boundary, thus we can see the Molotov Man in Latin American appear in different countries with different purposes, even as a commercial.

I do think Joy Garnett violates the copyright of Susan Meiselas, and I think that he does not view himself wrong, in fact, he tries to justify himself by causing further reactions from other people’s further adaption of Molotov Man. He may be thinking that the more adaption from different people may lay the pressure on Susan Meiselas that she may decide quitting suing him. And he seems to compromise by putting Susan Meiselas name beside his painting. But as a painter, he seems to lack the understanding and awareness of copyright, and lack the respect of other people’s work. He seems to be taking the talents of other people when his is exhausted. However, the problem Joy Garnett reflects is more than the lack of awareness of copyright, it is the uprising trend of decontextualization and dislocation of art work. When an art work is done, it has its uniqueness in time and space, just as Walter Benjamin mentions in his The Work of Art in the Age of Mechanical Reproduction, the “aura” of the art work is the essence. I do not want to discuss whether or not photography can be viewed as a category of art, but I do think the replicas of the art work lack the “aura”, which means the uniqueness in time and space. Just as the Molotov Man, the original photograph is famous in its Nicaraguan context as a symbol of the Sandanista revolution. The replicas lack the context of the original photograph, and what they emphasize and portrait are the rage, regardless of what cause this action. This is the reason why there will be a thousand version, or more than a thousand version of one art piece. It is not because different people have different perception, perspective and background, but the context of the art piece has been decontextualized, thus people can put the art work in any given context as long as they are comfortable with. As a result, we see a Molotov Man in a Chinese soldier uniform protesting against America in Viet Nam War. We see a Molotov Man on the MacBook throwing an apple instead of a molotov cocktail. They are part of the many possibilities of one single art work.

Art is not only about impulsive emotion and feeling. The greatest works all reflect the context of a certain time. Artists like Joy Garnett using other people’s work as inspiration and not respecting the copyright should not justify himself as innocent in the Molotov Man issue. Copyright of one artist’s work should be paid attention to, but there are other things we need to be aware of as well. In a digital time like this, we are indifferent to the decontextualization and dislocation of art works. Even some people view this as their inspiration. However, in the process of decontextualization and dislocation, what still remain, what have been removed, what have been emphasized, what have been neglected, can all change the meaning and value of a certain object. Does context of an art work matter? Should people copyright their context? In a thousand possibilities, there are many remained questions to be thought of and discussed. 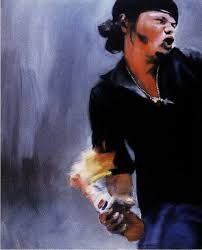