Lately I have been working on making the website look better. I had originally tried to integrate some templates into the design, but it was too difficult to customize it. This picture below shows the landing page as it is now. The second picture shows what it looked like with the template, so I spent this past weekend trying to get it back to that look but by hard coding it. The third picture is to show I have usable links up as well. Another part of improving the look of the website has been trying to look at other more casual education type websites to see how they curate them and what kind of text they have. When doing the user testing I realized it was confusing for users to use the site because it had little instruction or explanation. This made sense as in the beginning I focused more on the functionality of the site and spent much of the time looking for Javascript modules that would suit my needs. Moving forward this week I plan to flush out the look of the pages and add more meaningful text, that was my original goal for this week, but I got caught up in the CSS. Currently it does support speech to text and translating the text written or spoken to the International Phonetic Alphabet (IPA). 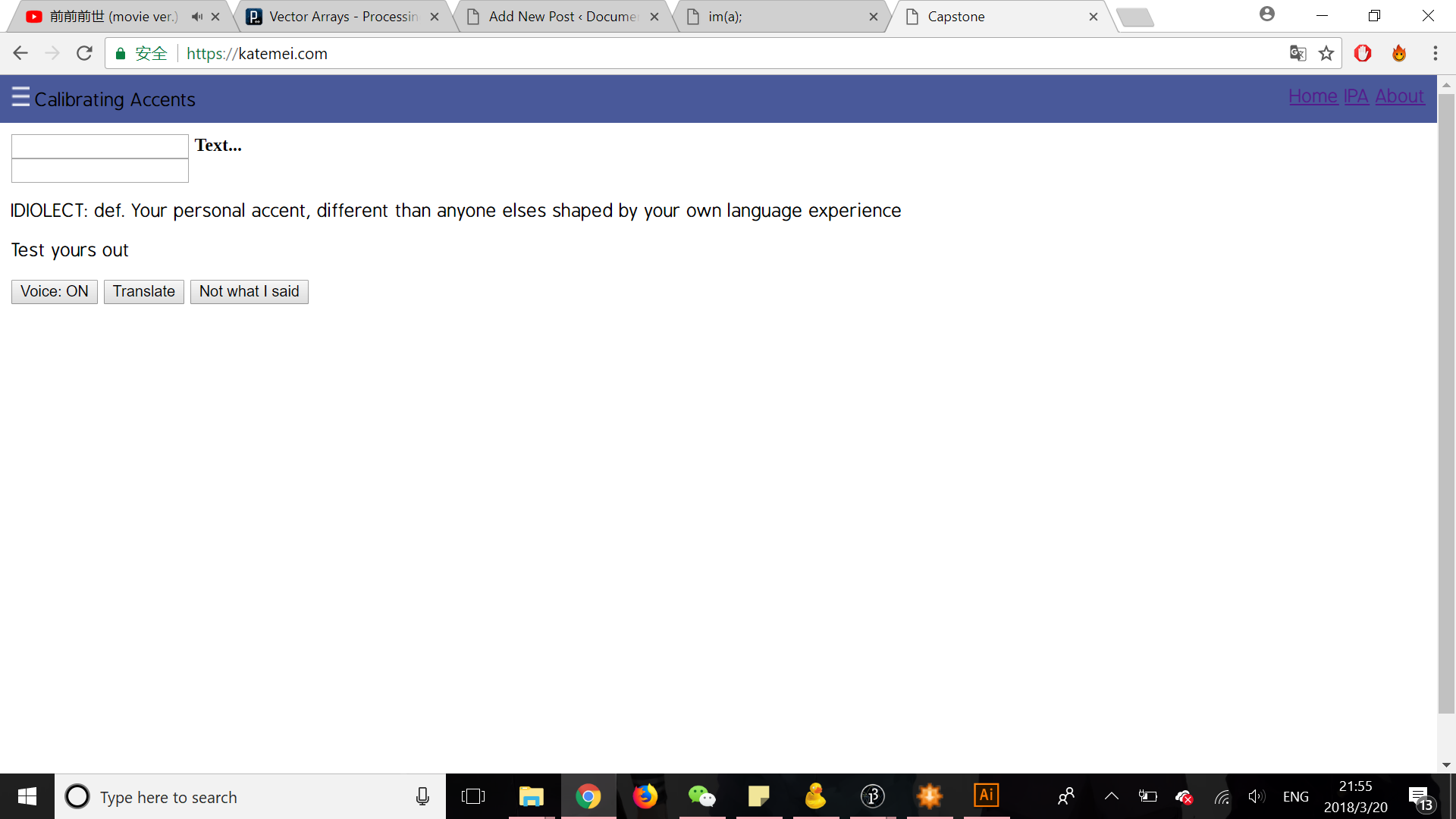 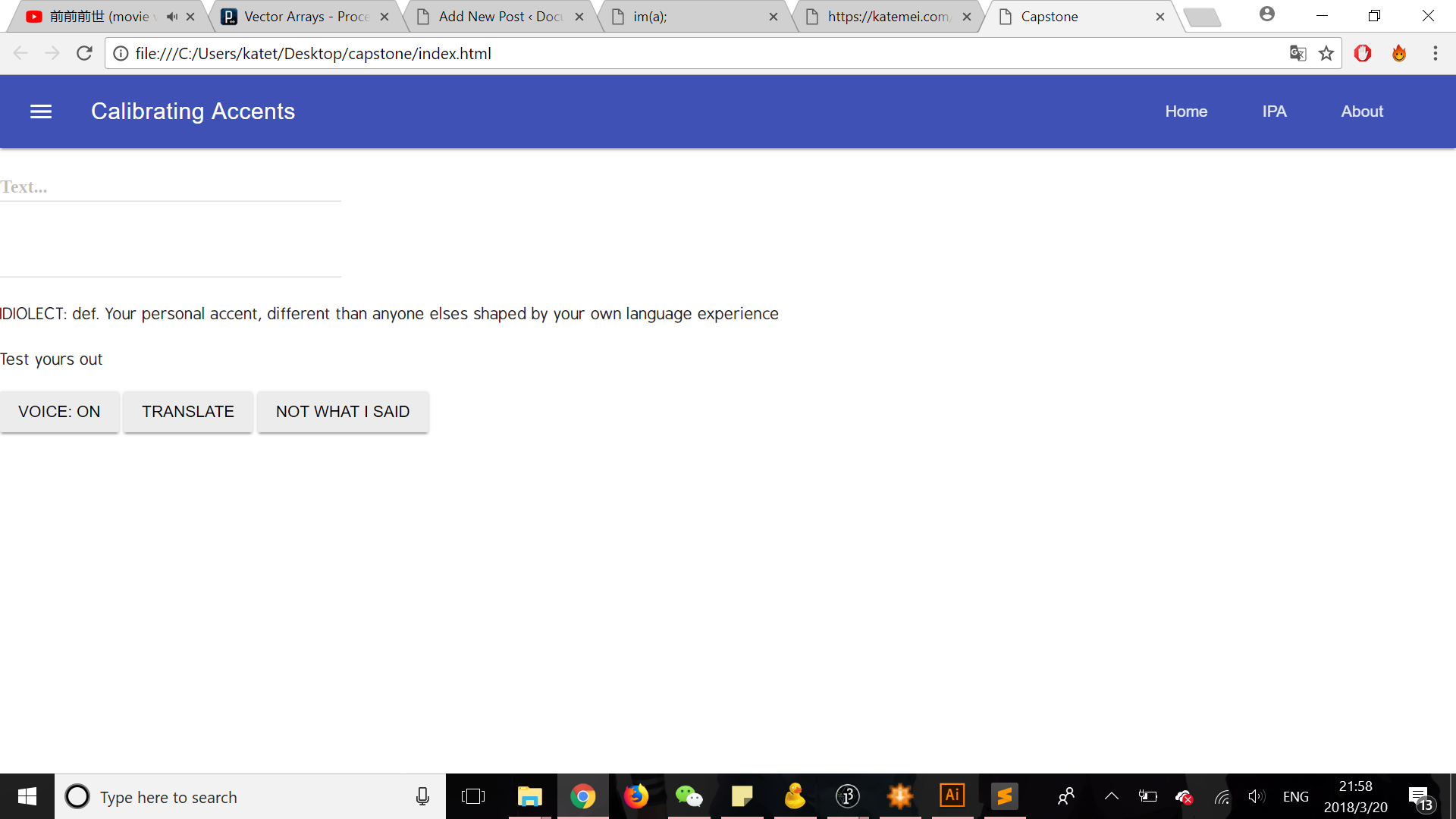 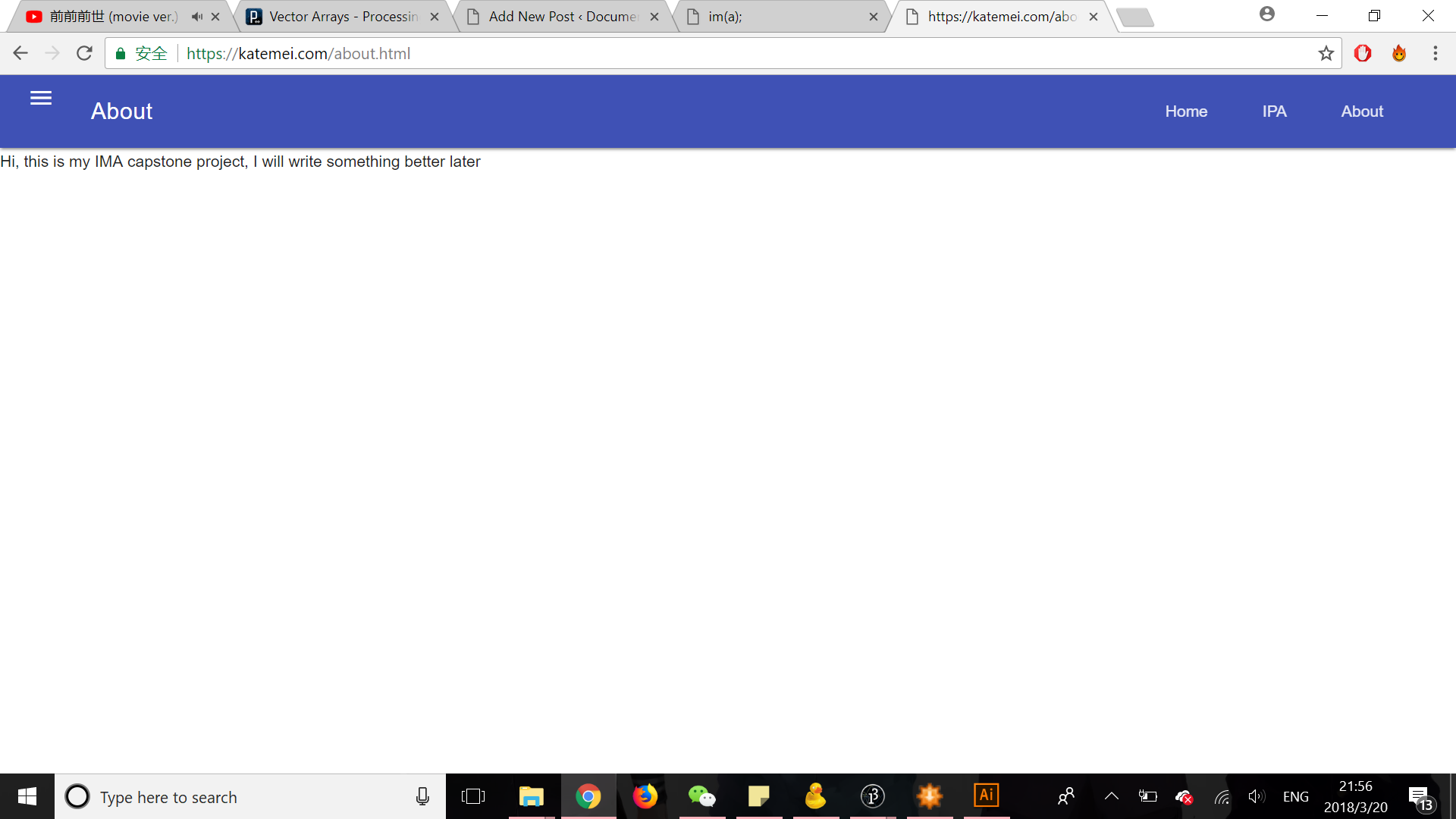 This project has an educational side as well so on top of designing and getting the website running I have been doing research to gather data for the site as well. Because of the nature of the data it was difficult to find a large database of the data in the desired form, but I was able to find one that provided data on a wide variety of people who speak English as a language other than their first. I was going to try HTML scraping, but the website was a little messy, so I went through and put it in a spreadsheet so I could easily use it. The next step for this part is writing equations for the different language generalizations and finding a way to implement them. I have found a module that can do text to speech for the IPA, but it sounds very robotic. 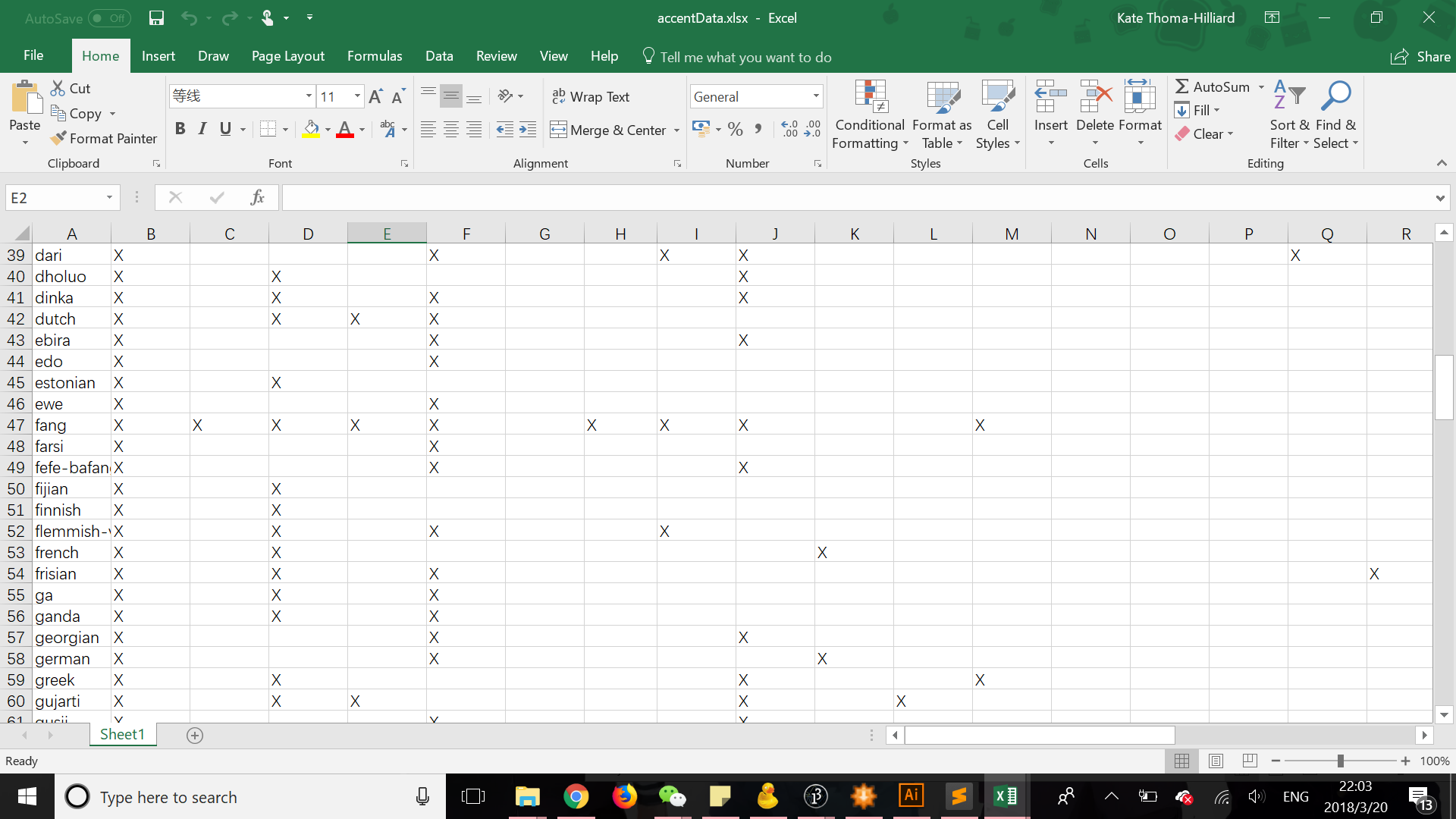 To be able to easily use the equations and show how things are shifting between accents I have just made the common IPA charts into spreadsheets so I can plot out how things shift and use them for the equations. I will have to make the decision on how much of the IPA I will be using as some phonemes exist when people speak English in an accent or dialect other than the neutral American one. But it would also make building the website and planning for how much of the IPA to let people explore more difficult. 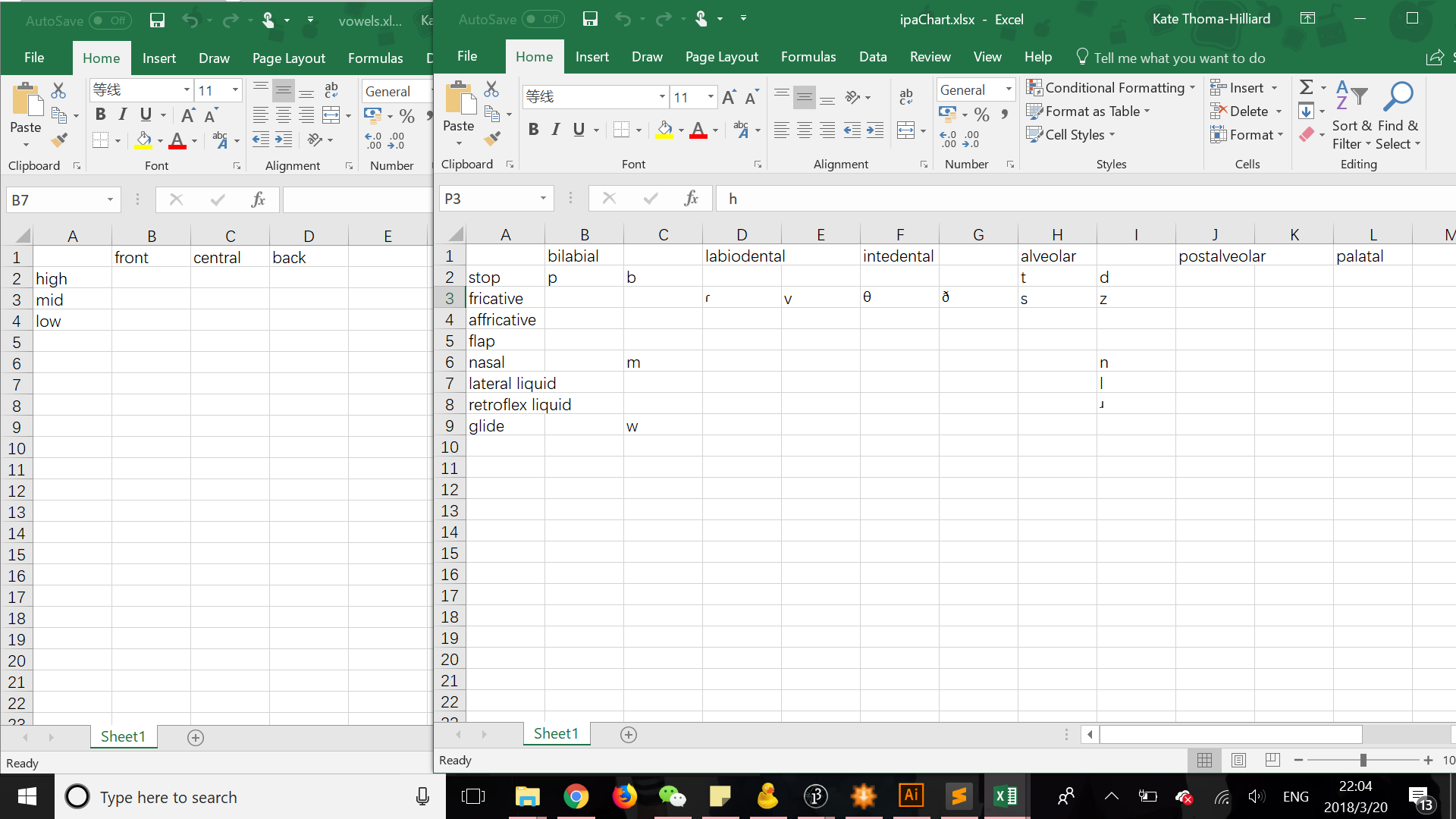 For the hardware side I have begun trying to plot out how the IPA might look on a keyboard, I modeled it slightly after the Chinese keyboard for Zhuyin and Korean keyboards with vowels on one side and consonants on the other, but am still not 100% set on the design. For the actual keyboard I am building it will be in a square grid, but I would also like to make a keyboard for those trying the website without access to the special keyboard.

Below I inserted the p5.js code I had for visualizing the speech. I had originally had it show the entire wave, but I think I will try to make it into a plot of place of articulation for vowels. A version of something similar to the one below. 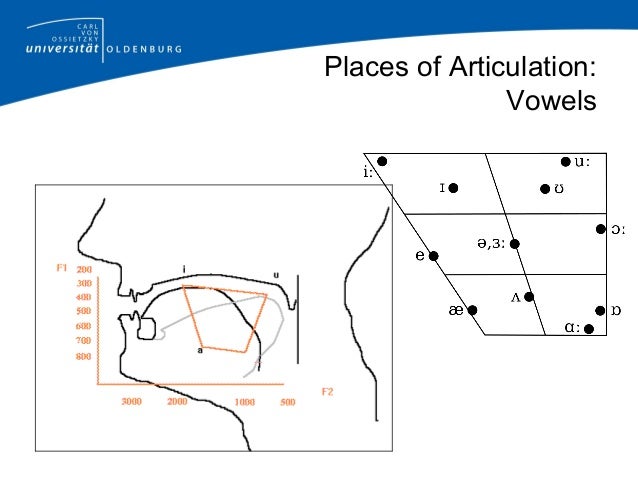 Here is how someone can interact with it now. There are still some bugs, but after user testing I decided to make the text and spoken part more independent.

From user testing I think the most difficult part will actually be the curation of the website, which I didn’t actually account for, but is what I will need the most feedback on especially once I settle on a design.

The goal for this round was for people to be able to input text or talk into the microphone and have the site recognize and translate it into the IPA. Going in to user testing I knew that I had not done much to curate the website and that really showed during testing. People were a little confused of what to do and what language things were being translated into. An unexpected coding error came up when the text wouldn’t change when switching from typing to using the microphone. It was still picking it up, but wasn’t displaying it.

I had one person who knew of the IPA test it and the rest did not. I tried it with people with different accents, but one of the users did not want to try the audio part. Which was okay since there is a typing option, but was not helpful in trying out the website. The biggest take away moving forward is how to convey what I am doing but also try to keep it light on the text. Most of the users did not move beyond the first page even though there were other tabs. I think part of it is because it is very clearly still in progress. But users were excited to see the translation and that it worked, so it is good that the interaction seems to intrigue users. However, I would like to try to make the controls more natural I am still getting a grasp of how to use the modules properly.