Here is the link to the slides:

For our final project, we plan to make a system that keeps track of the annoying things that disappear a lot, such as keys, chargers, and NYU id cards.

The system would utilise ethernet shields, Xbees, and so on, and serve a website for the user to control the missing stuff blink or buzz when they are hiding away from him.

For the details, see the slides~

After searching online, I found this project very interesting: A Wireless Hotspot that broadcasts the weather as its network name.

“WSSID” is a hacked wireless router that collects and broadcasts live weather data from it’s local environment  in the form of dynamically changing SSID names. The project examines the use of wireless networks on the environment and how we are always seemingly in range of these signals without explicitly asking to be. Operating similarly to the way that weather is beyond our direct control, “WSSID” shows us how permeating these networks have become by relaying direct environmental data about the locations in which they are housed. 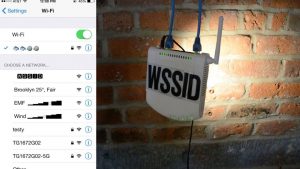 Although this project is basically useless given the existence of all kinds of weather broadcast apps around, it is very interesting. For me, I think it would be even more interesting if we add some other inputs to it. As we can see above, to have a comprehensive weather report with this project would be bothersome and expensive, since you will need multiple routers. One change we might be able to do is add another physical input to it so that a user can decide what he or she wants to see. For instance, the physical input could be a switch. When the switch turns to temperature, the router changes its network name to the information about temperature. In this way, we only need one router to get comprehensive whether reports.

Our idea is to create a WIFI connect weather module, which utilises several LEDs to represent the temperature. What’s more, we added a fan, so that the module would turn the fan on when it is too hot. So, we used an API from Yahoo, which provides the information of weather in Shanghai. Then, we made everything work according to the data we get from the API.

Here is a demo of what we have done: 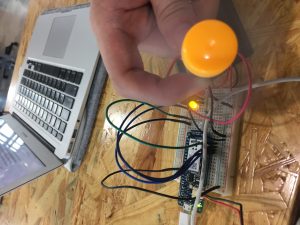 We met tons of problems this time. For some we solved, but for some others we haven’t. The first problem we had is about converting the data to actual integer that we can use. The reason is that, the code provided by Temboo prints the data in character, to be specific, a character a time. It uses a while loop to print all the information from cloud(e.g. The temperature:\n 87). Therefore, we had to get the characters one by one, and distinguish numbers from letters. Furthermore, when we finally convert the characters to integer, we also had to use some math to interpret things like {8, 7} as 87. Luckily, this didn’t took too long.

The second problem we had is about the fan. Apparently, a fan would consume too much energy. Therefore, we used a transistor, i.e. TIP122. But a new problem comes that, we are not so sure about what transistor to choose, and the data sheet is too complicated to understand. We only get cleared that TIP122 is a N-P-N transistor, and what the “e”, “b”, “c” feet are. So, we took a random shot, but luckily it worked, with a pull-down resistor of 30 Ohm.

The third problem is the toughest, for which I am not confident that we have handled completely. The thing is that the WIFI shield is not very stable, especially when it is stressed out which too many outputs.  Sometimes we cannot get the information from the cloud. This happens periodically, and we guess it is still about energy, but we are not sure.