Inspiration: As I was searching “net art” related websites on google, I found a super cool one called Colossal, which contains the gif below that led me to think about what to make for this project. The more time I spent staring at the movement of the particles in the gif, the more I love it, the stronger my sense of “chaos” and “order,” “attraction” and “repulsion” is. Then I started to think about what I could extend on top of those keywords in order to guide users to think more rather than just “surfing” a website.

END_OF_DOCUMENT_TOKEN_TO_BE_REPLACED

Humans are so used to what they look like as “humans” — we have muscles, fat, skin, hair etc. — layers and layers wrapping our bones. I believe such appearance makes us feel alive, with animal heat, with endless energy. But what if there is a contradiction between what we expect ourselves to be like and what the appearance we actually receive by mirroring? What if such appearance makes you somehow feel that it is you while it is not really you, you are alive while you are not really alive?

We consider the appearance of skeleton the best choice to create such feelings in humans. How do you feel if you see yourself appear as a skeleton when you are in fact expecting to see your actual human body? How do you feel when seeing your bones dropping on the ground when you’re moving that part of your body really fast?

In our final project, we aim at exploring people’s reaction and interaction with themselves — their appearance as skeletons. We not only provide users with a funny interaction that can never be possible to achieve in real life (seeing yourself being taken apart by yourself) but also a chance for them to immerse in accepting themselves as skeletons, making them feel that “something that should be dead can actually stay alive.”

Inspiration: “Trust games” have always been popular among friends, so our group agreed on Diego’s idea of designing a new form of trust game on fabrics (which in our case is a shirt).

To start with, we first drew our circuit on paper to get a clearer idea of building the actual one. Since the components are duplicated in our project, as you may see in the picture below, we only drew half of the entire circuit. 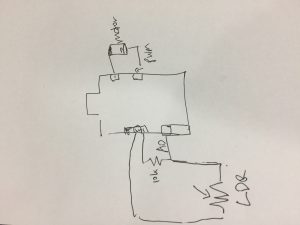 Then we moved the whole circuit onto the Arduino. 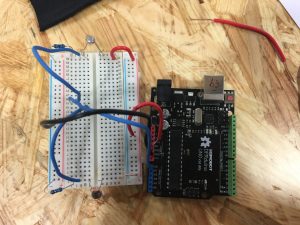 To test if this circuit was working, we connected the motors to the Arduino in the simplest way that is shown below. 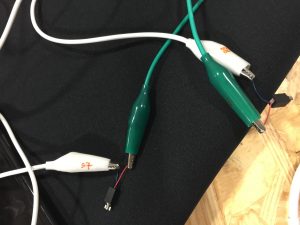 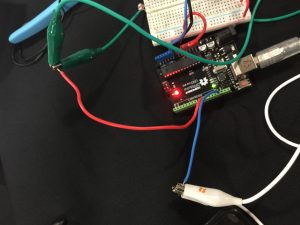 As you may see from the video below, since it was working well, we decided to move the whole circuit to the lilypad.

Similar to what we had done when building the circuit on the Arduino, Dania and I took turns trying to figure out the circuit on the lilypad. We tried more than three times drawing it on paper, and below is what we considered the best well-explained version. 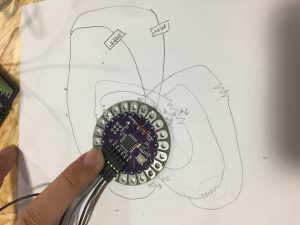 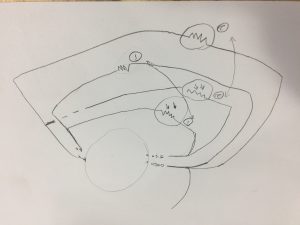 Then Dania and I took turns sewing the whole circuit onto a piece of fabric. We used conductive thread as the connection between the lilypad/the resisters and the wires (as is shown in the pictures below). Since there are many branches in our circuit, in order to avoid short circuit, we used strong wires as the “trunks” of each branch and made hooks on both sides so that it would be easier to sew the branches with conductive thread. Since conductive thread is kind of hard to be stay in shape, I also twisted the softer wires and twined them onto the stronger ones to make better connections. 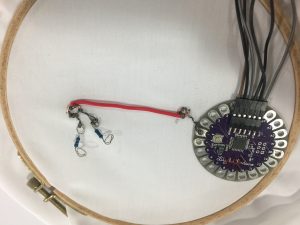 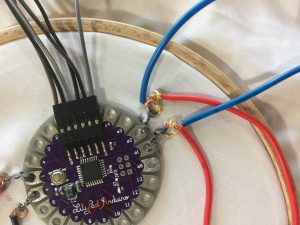 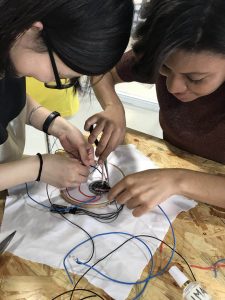 Twisting the wires and making hooks on both sides. 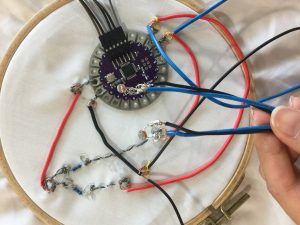 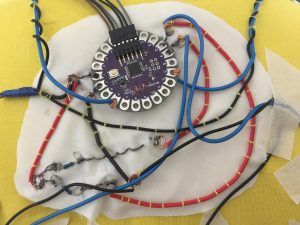 Initially, we planned to place one motor on each sleeve. However, I realized that the upper parts of the two sleeves (arms) are actually in the air when we are wearing T-shirts, which means the two sleeves actually cannot directly touch our skin. Therefore, in order to improve the functionality of our project, we agreed on moving them to the back, over the LDRs. Diego and Leah finished sewing the motors on the shirt. In case the circuit works, Dania and I took a testing video first before moving on.

It is working well. Dania and I then started placing the LDRs. 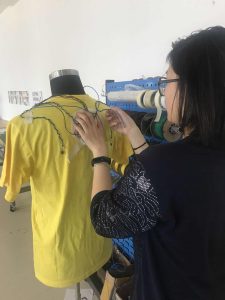 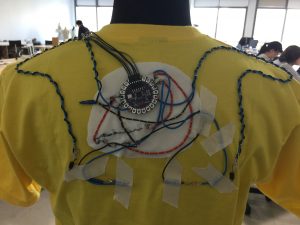 Since we changed the placement of the LDR, I cut the extra length and placed the LDRS on the shirt under the motors, first using tapes to stabilize them. 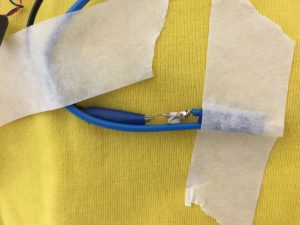 After finding the most appropriate position, I used the little scissors (used for cutting threads) to make a hole on each side of the shirt so that the LDRs would appear and detect light efficiently after flipping the shirt inside out. 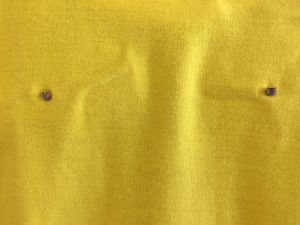 Below on the left is how our shirt looks inside, and on the right is how it looks like outside. 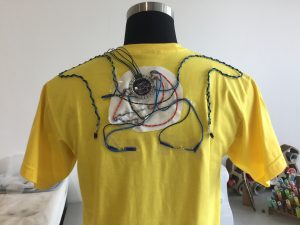 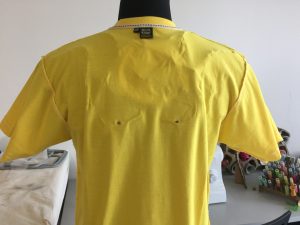 We did test whether it worked or not after finished everything, and it worked. Unfortunately, we forgot to take a final working video which is so stupid of us… Therefore, it turned out that when we were presenting to our class, one of the motors was off and one of the LDRs was broken.

For further improvement, first, we would definitely remember to take testing videos throughout our process so that we will have something as a backup to show our peers. We did do testings throughout the process, however, taking testing videos while testing is even more important!!

Second, to make it wireless, we will definitely have the 3.7V battery on our circuit so that we don’t have to connect our circuit to the computer.

Third, in terms of the whole design, especially the circuit design, we would spend more time to make it neater, so that it won’t look so confusing and sort of chaotic inside our shirt (but we did try our best to make it as neat as possible!). 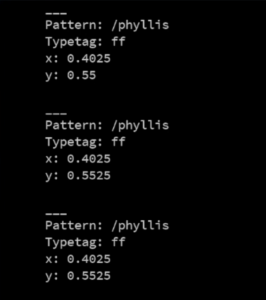 Below is the demo of my really simple sketch. 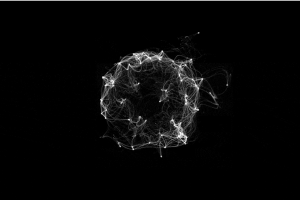 Each particle represents one story? One kind of interaction?

Interaction should guide users to think more about being flexible, creative, incorporating interaction with the keyboard?

Each planet has one terrain: sand, water, fog/cloud, mountain?

After reading Rachel Greene’s article, I find it really interesting to imagine what the Internet was like before it became what it is today. As Greene said, “the Internet allowed net.artists to work and talk independently of any bureaucracy or art-world institution without being marginalized or deprived of community.” That is to say, the internet as a platform is so different and outstanding that it enables artists to talk, discuss and work not only independently but also form a community of net art without being marginalized. It gives access and creative control to the passionate rather than the powerful. When artists have control of their own work, it greatly opens up the kind of work they can do and consequently expands what people can be exposed to.

I personally had less knowledge about the Internet before, holding the stereotype that it was about nothing but coding, which is as lifeless as programming itself, with no creativity. However, now I realize that the spirit behind the web can actually be “lively and gregarious.” The web can also act as some sort of mainstream media that provides people with great enjoyment. Rather than considering “net” as a form of expression of coding, we can think of it as some sort of communication tool or even a creation of a high-tech century. The Internet is no longer equal to coding, instead, coding serves for the Internet. The Internet provides people an alternative to communication, and coding thus is brought to life.

I created a simple interaction with Kinect by making a comparison the center position and the width of the sketch.

When the center position is between 1/3 width and 2/3 width, the body within that area will change into a colorful one. 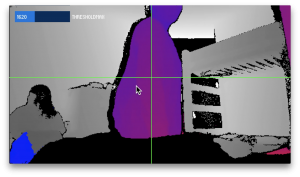 When part of you are out of that area, you will get the depth image of that specific part which is outside of the boundary and the rest parts of your body remain colored. 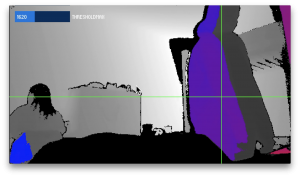 Here is a demo of my assignment.

Paul Rand explores the relationship between digital programs and creativity in “Computers, Pencils, and Brushes,” holding the opinion that the use of computer produces “a language of technology rather than “a language of art.” I find Rand holds the opposite opinion in comparison with Graham to some degree. I remember Rand saying, “concepts and ideas spring from the mind and not the machine.” Yes, I agree with his point here. Without a knowledge of design, the computer is more than useless, let alone producing anything that is as creative as an art piece. However, I don’t agree with Rand completely in a sense that the computer actually can create various art forms. Especially in the modern age of technology in which high-tech is more prevalent than ever, so many art installations are increasingly combining artistic ideas with the use of the computer. Film production, graphic design, user interface design, 3D modeling… endless creativity consuming art forms are having tighter and tighter connections with the computer. Therefore, in response to Rand, I think that we have to try our best to get familiar with more computer skills and meanwhile keep thinking — keep our eyes open and be aware of every detail in life — to force ourselves to be creative.