For my final project, I wanted to analyze the 99 names of Allah by using their frequency in the Quran and then visualize it using traditional Islamic art and calligraphy methods.

Some existing projects on data I looked at while ideating:

[ The Periodic Table of Islam ]

The 99 names of Allah is a concept in Islam that represents the 99 different qualities or facets of God. These names describe the One God (one of the names is also “The One”): He is the Protector, the King, the Friend, and the One that Knows all at the same time. I thought it would be worthwhile to explore these names using the analysis and visualization techniques we used in class to see what the relationships between them were and if these relationships can be mapped using mathematical and generative models. 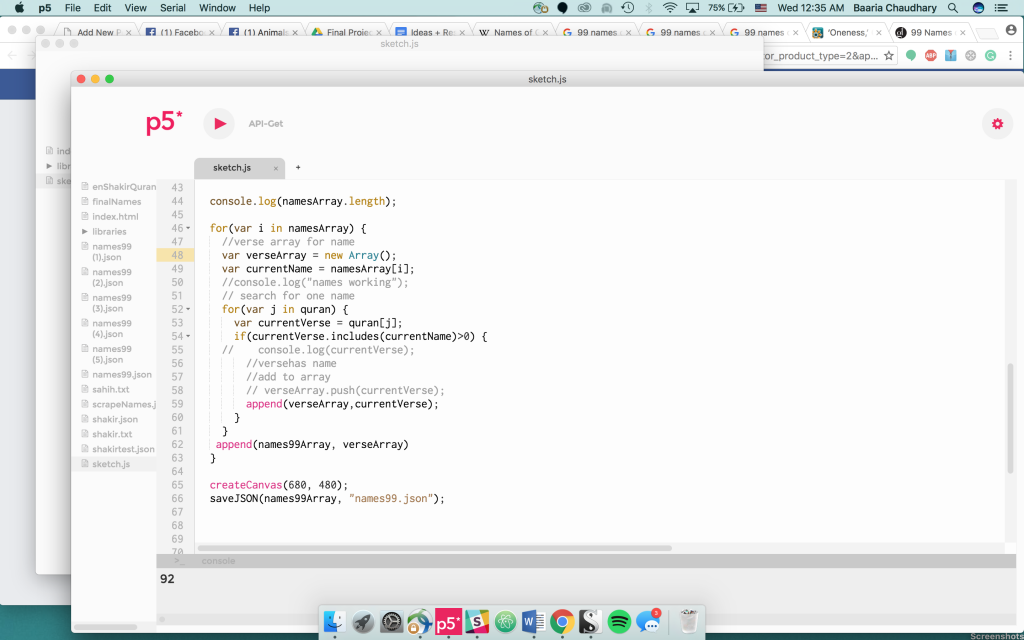 Getting data from the text file and saving it to a JSON file. 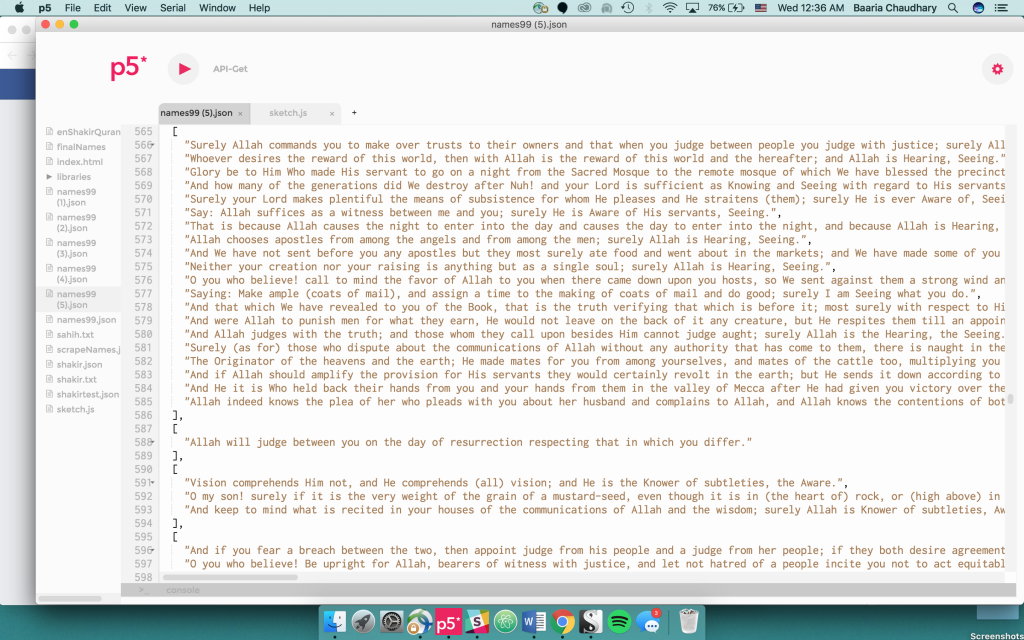 I initially had a lot of trouble figuring out how to get the data without extracting it manually. This, along with understanding how to visualize the conceptual complexities behind the names, ended up taking up a lot of time. Even after finally understanding how to get the API to work, I had a lot of trouble in terms of quality control. There were many English translations for the Quran available, and there is no consistency on how specific words can be translated (it’s not a complete mess; just more a complication involving synonyms. Arabic is a complex language and each word has multiple meanings. I could have used the simple Arabic one to scrape the data but even though I can read Arabic, my understanding is not too good and I didn’t feel comfortable doing it. After struggling with it, following Roopa’s suggestion, I switched to simple text as my data did not change. Still, because of the translation issue, I had to manually search up the names in an online web-based Quran to make sure that my array of names matched up to how they were described in that particular translation.

It was also difficult visualizing the data because I wanted it to be symmetrical and reminiscent of Islamic geometry but some names were very obviously more mentioned than others (which was the point). Also, it was interesting to consider how the names could be compared to each other, other than frequency. I wish I had expanded more than just evaluating frequency. But I do want to continue working on this and polish it, so hopefully that can happen. 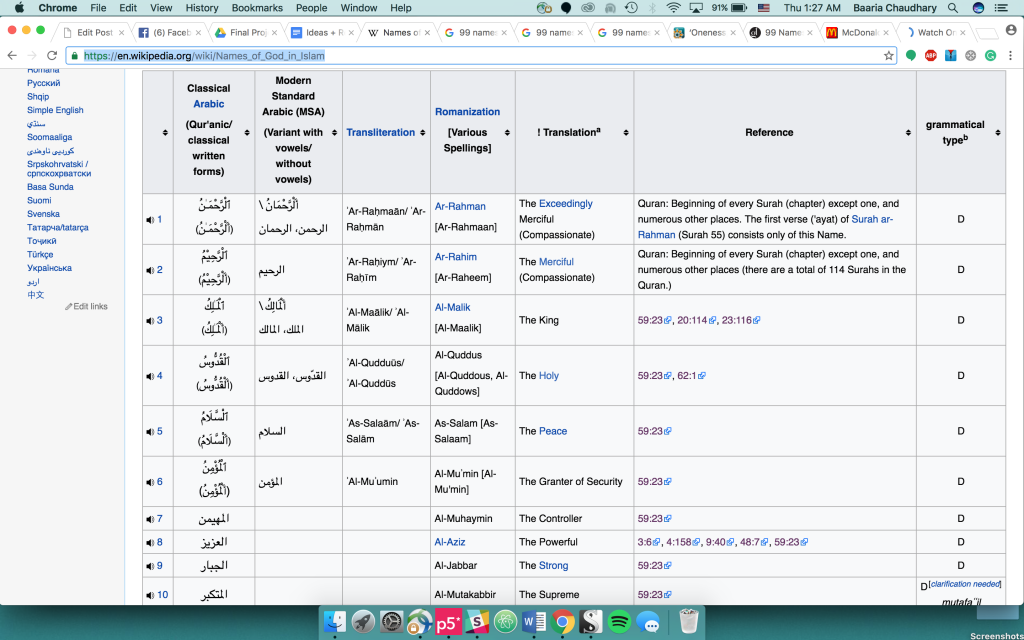 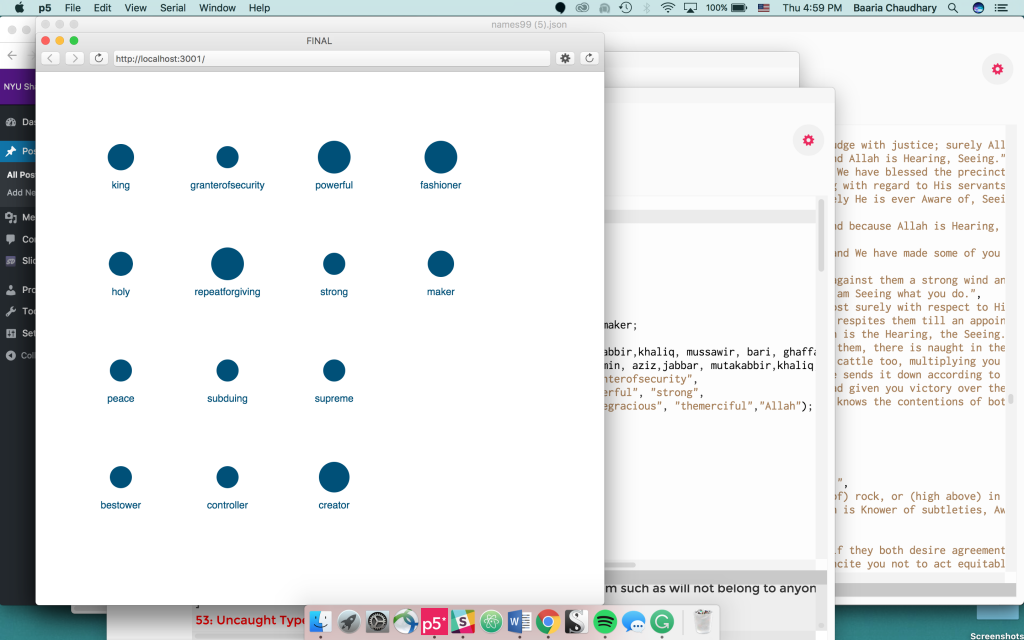 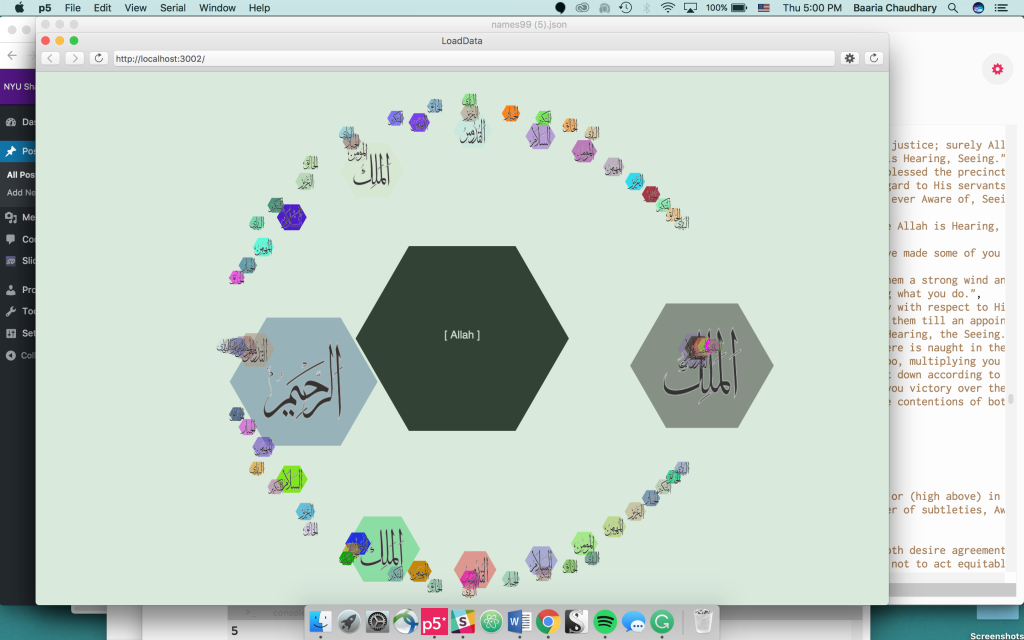 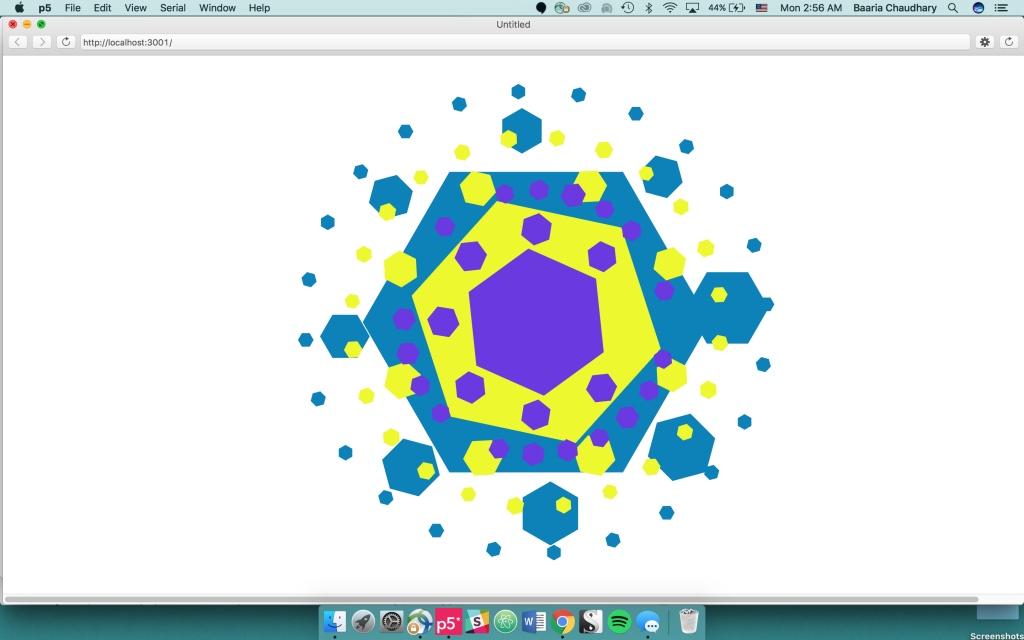 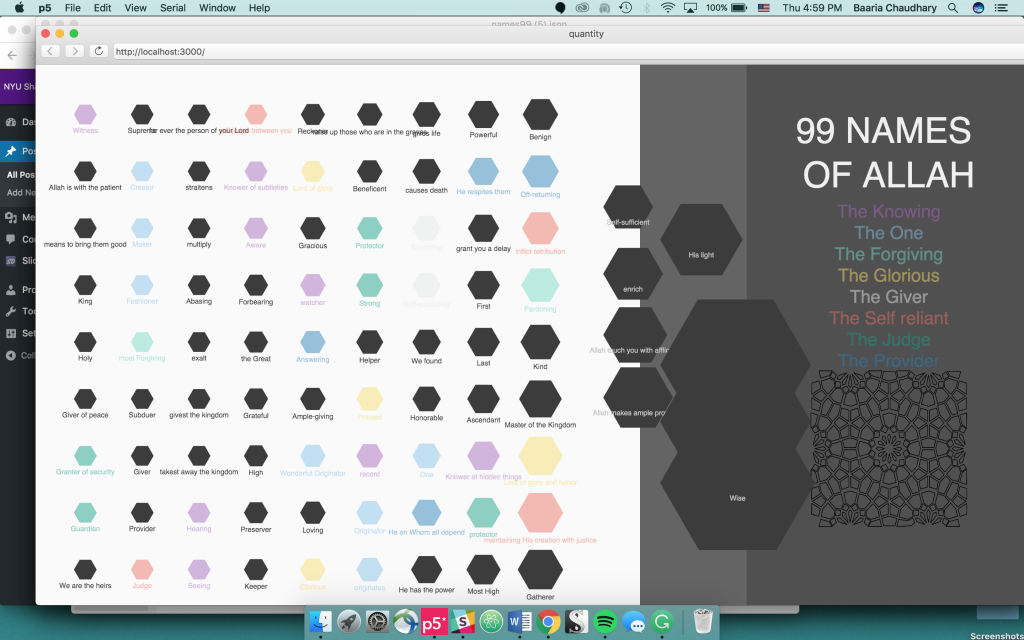 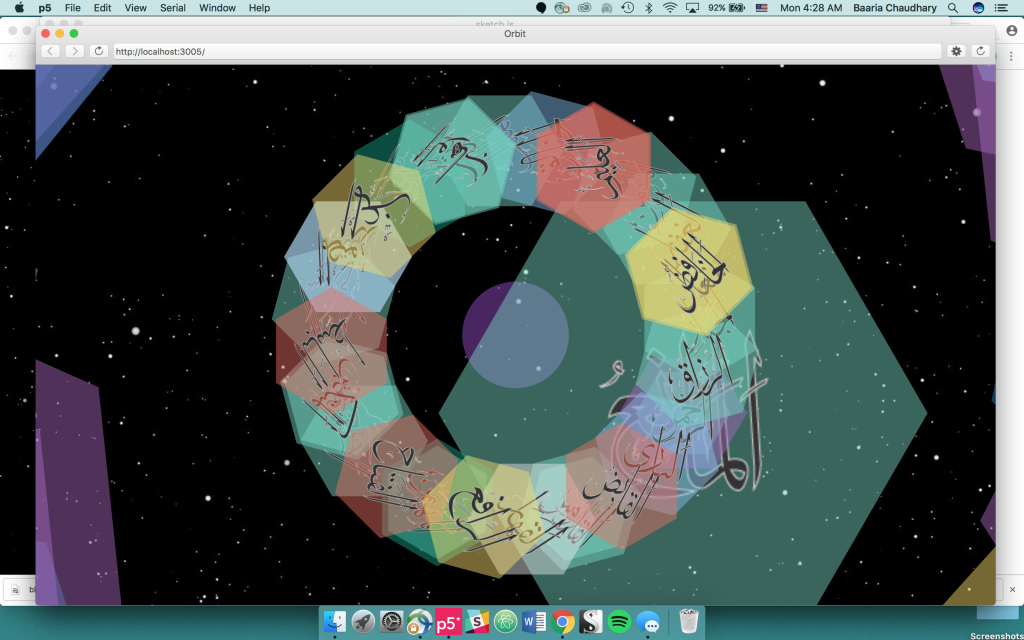 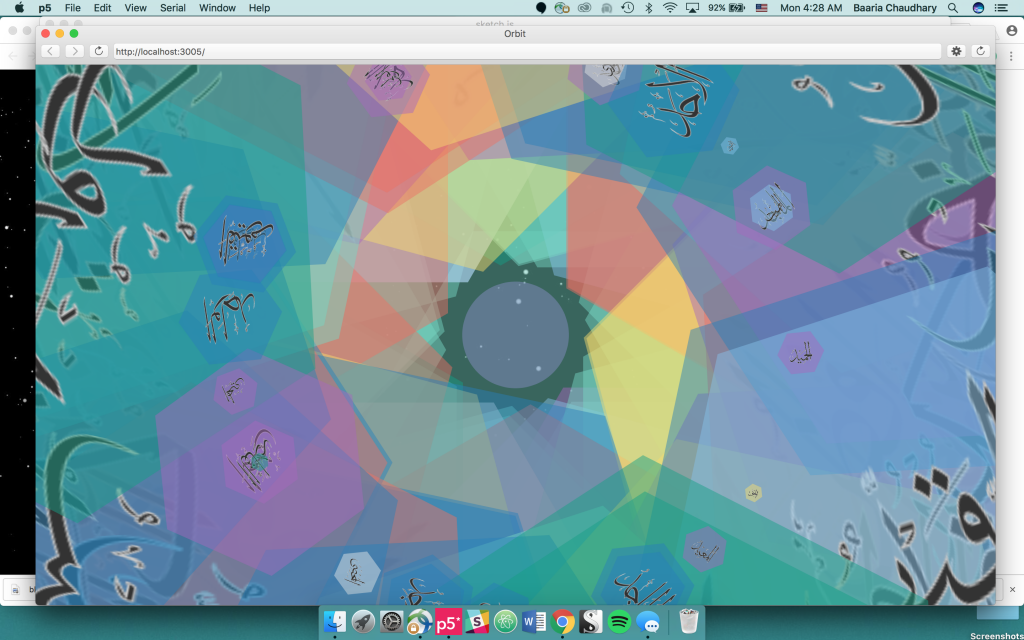 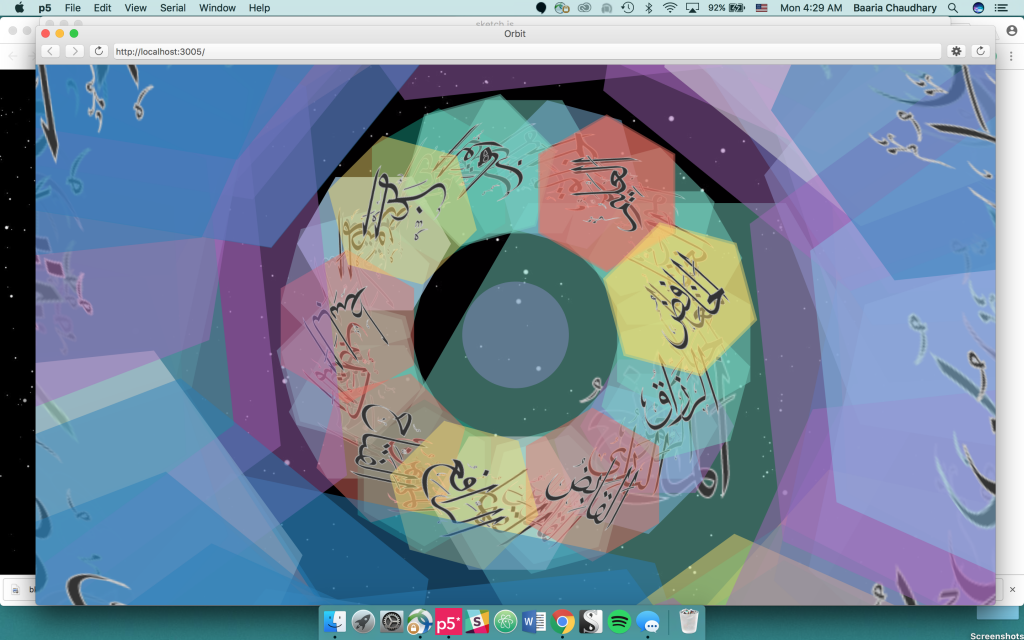 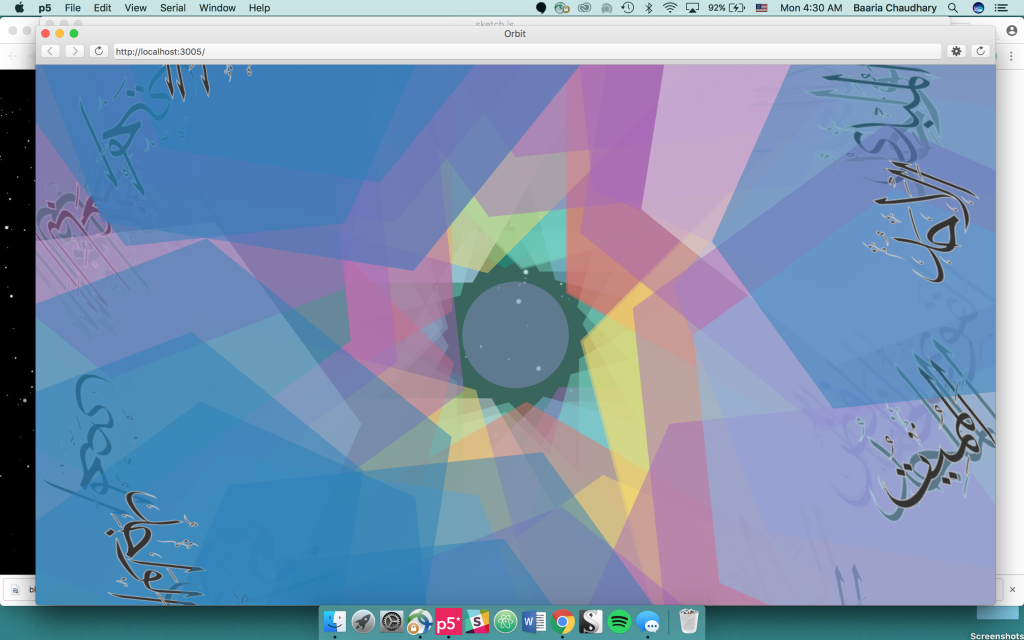 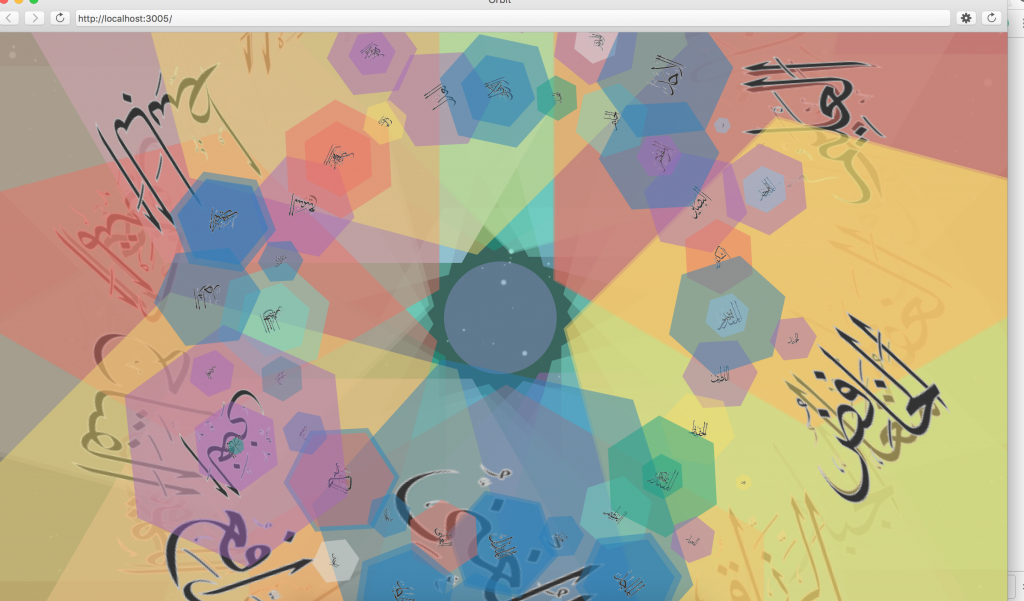 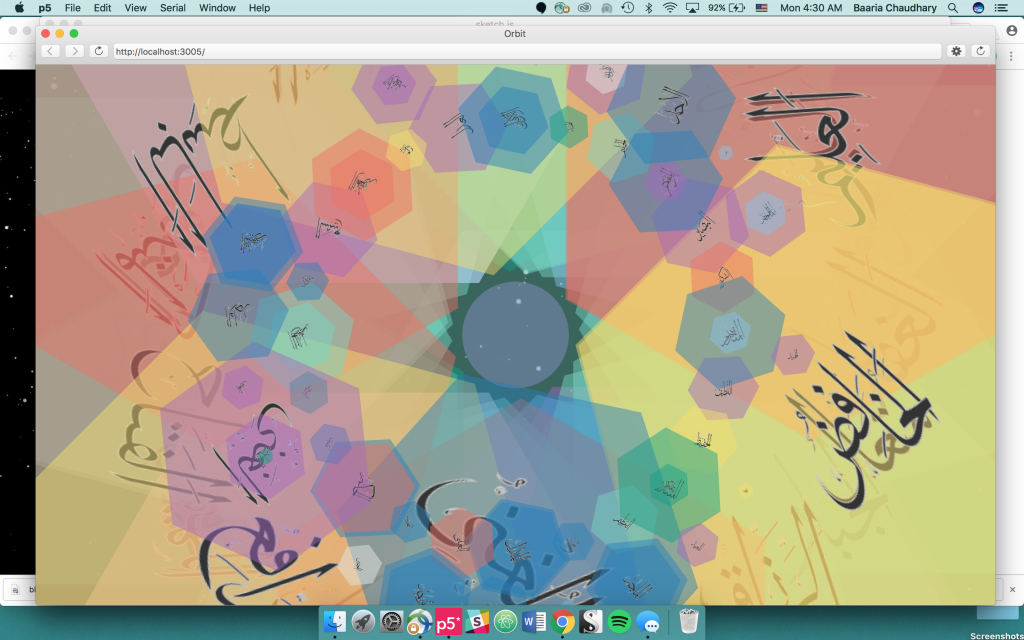 Below is the code for the last final orbit one. I also have the code for getting and organizing the data and the more even iteration.

We learned two ways of 3D paneling in class, both of them are very useful. I never tried 3D paneling too in Maya before. And I felt very convenient when I used this tool in Rhino.

Above it the link to my rhino file. I made all my work on IMA’s laptop and I can’t open this file on my laptop. So I put a link here.

I struggled a lot through my final project. My theme is about paper tapes. I would like to visualize the top 100 popular paper tapes in China. Since it’s a newly-developed market, not many people know about it. Therefore, I wanted to do an introduction of paper tape.

I agree with what xy said. It is very hard to visualize a visual product. Therefore, I met a lot of problems. Even at the deadline of my project, I’m still confused about my concept and layout I should use. I asked many people who are not familiar with paper tapes market at all about their opinion. Most of them told me that what interests them is the pattern of paper tape. However, pattern is not a data. So I have come up with an idea about using paper tape pattern to show my data. I’m not a big fan of subjective data such as level of satisfactory. Hence, I decided to visualize very objective data, such as the size/width of paper tape, market price, its name and the retailer that produced these tapes. First of all, I decided to use a donut shape to make a metaphor of side view of tape. However, this shape is very misleading. Many people told me that they thought it is a visualization of CD instead of paper tape. I changed donut shape to pie chart in the end. I made a poster that shows all the pie charts. In order to show the pattern, I printed out these charts and cut them out. I covered them with tapes and connect them with paper tape.

Below is my work. I’m not satisfied with my project at all. It didn’t meet my goal. I will continue thinking about it. 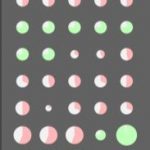 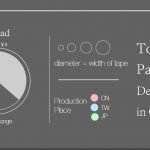 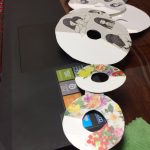 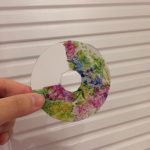 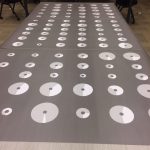 For my final project, I would like to conceptualize the Quran by searching and extracting verses only by the 99 names or attributes of God mentioned in the Quran and creating an interactive art piece centered around them. I’d want it to be representative of Islamic art, which mainly consists of patterns and shapes, specifically formed via arabic calligraphy. Right now, my idea is that the resulting project would be an animated fractal (a mathematical shape consisting of shapes entirely like that) and you can zoom in to see the specific fractal which will be consisting of the verses that mention this name.

I’m also exploring the concept of fractals in my other class, the Code of Music.

Here is a link about coding fractals with examples so you can see what I’m going to try to go for: http://andrew-hoyer.com/experiments/fractals/

[ The Periodic Table of Islam ]