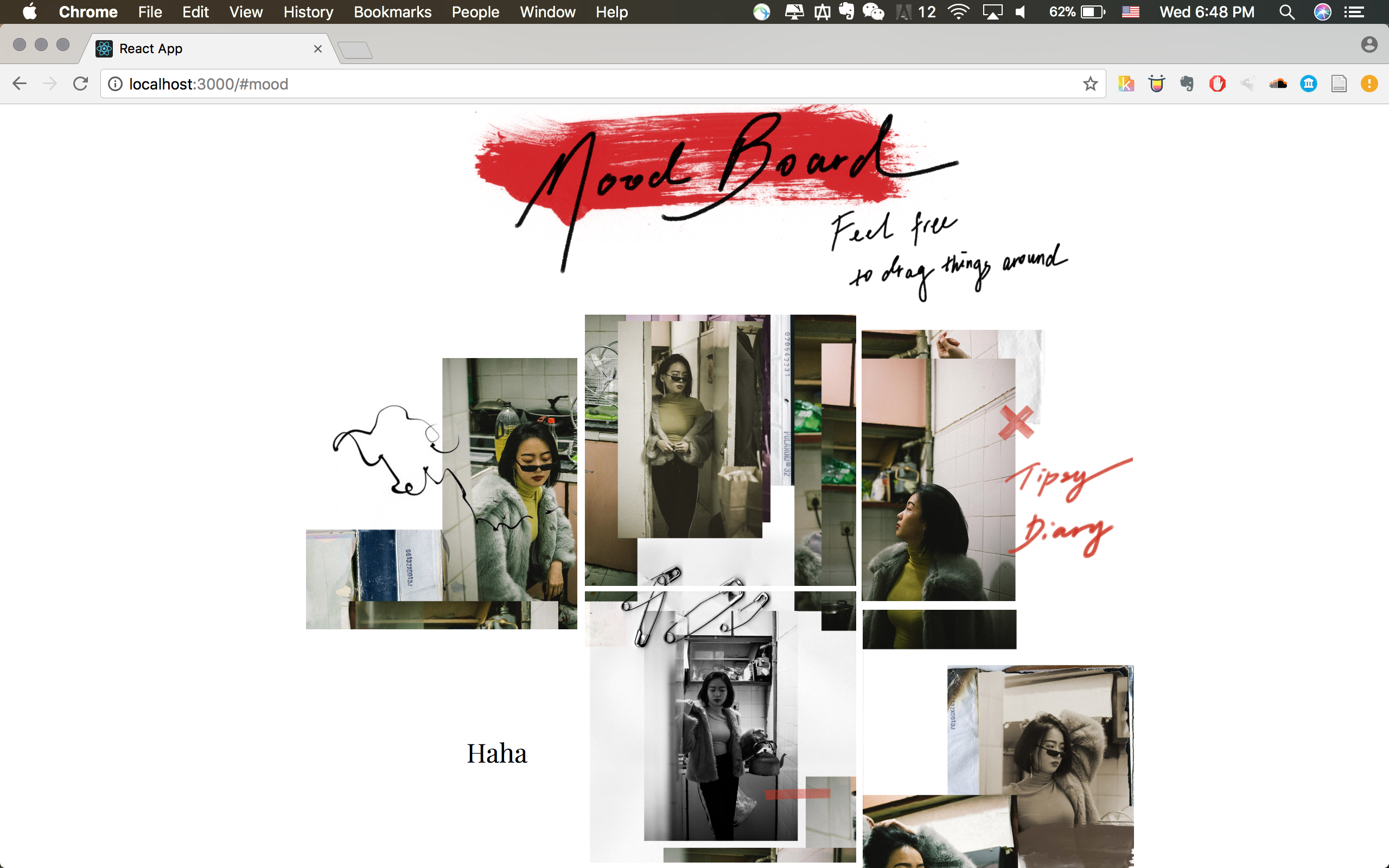 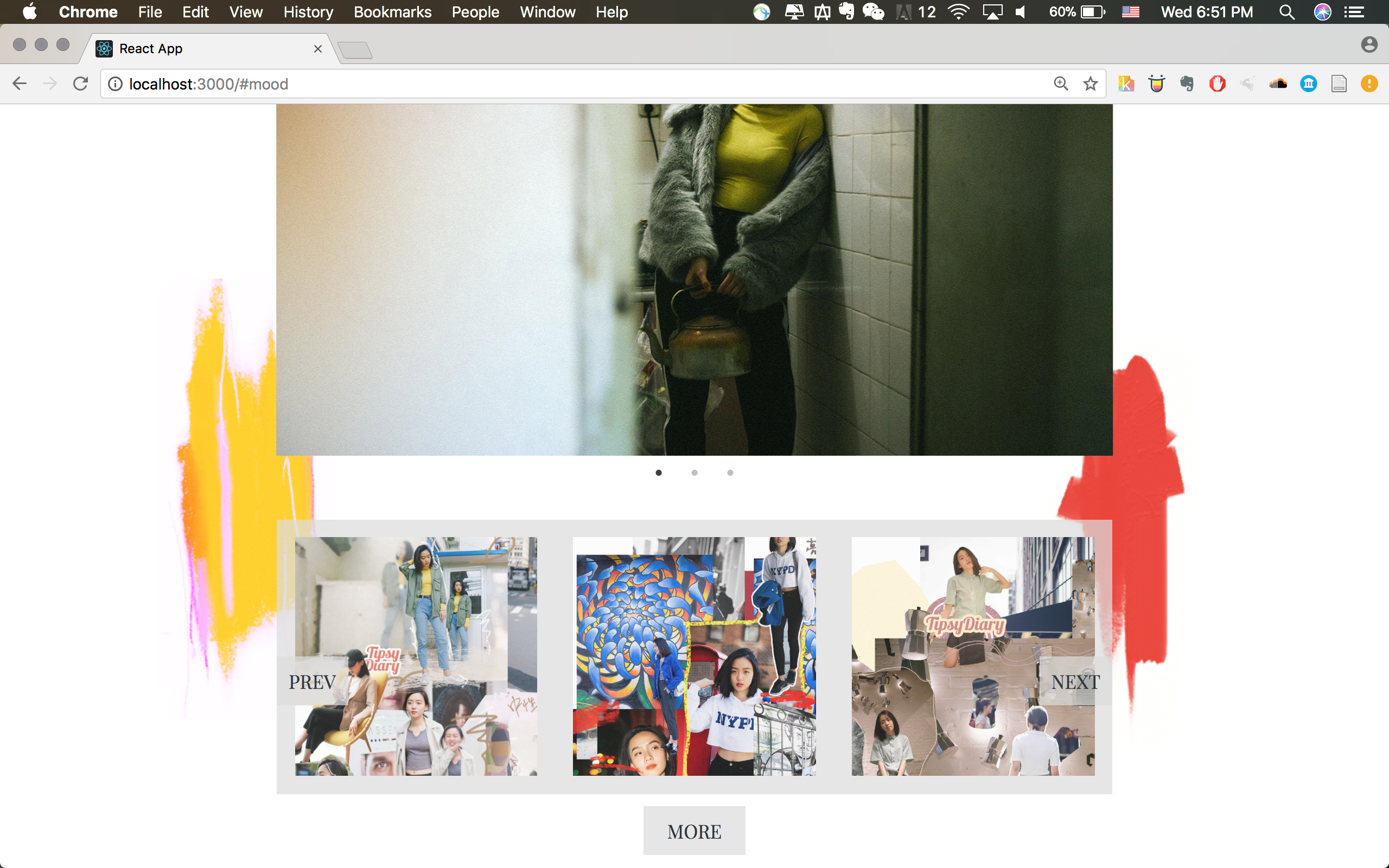 As I have talked about in my previous blog posts. I used React to make a blog that is catered to a personal project I’ve been working on. I design the layout of the site specifically basing on the mediums and content that I have created and the ones that I want to incorporate into the blog. 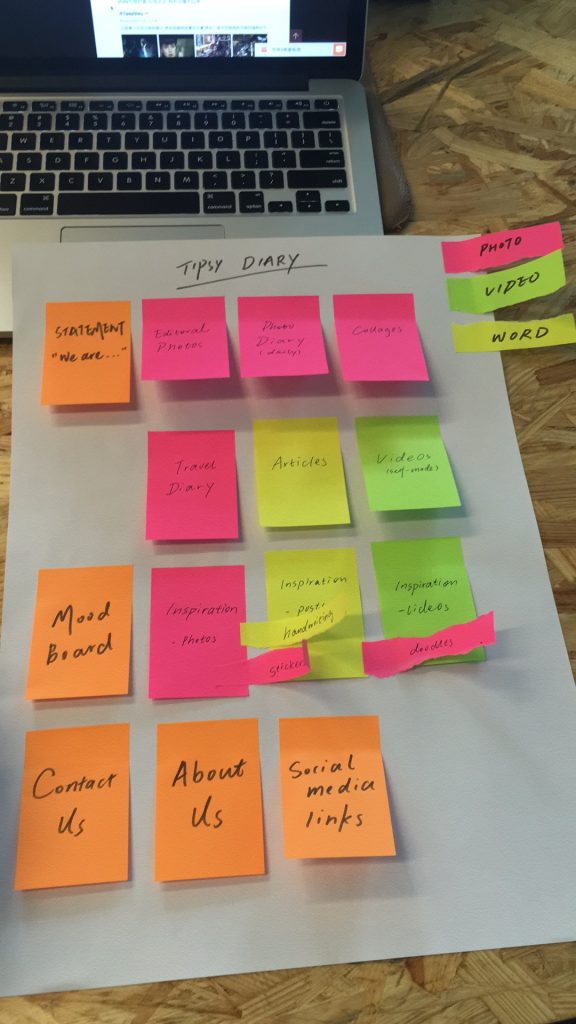 Leon’s paper prototyping workshop was really helpful in helping me figure out which contents that I want to put in and how I want to group these information.

Since I already have a visual style defined in my visual content, I want to reflect and amplify that in the entire site. A lot of my work are collages and I often feel frustrated with the template that most social media platforms provide, so in my own website I want to have the collages to be offset at the beginning and have my visitors drag things around and experience the process of putting the pieces into a whole. This process replicates my process of making the collages and emphasize the role of composition plays in my works. 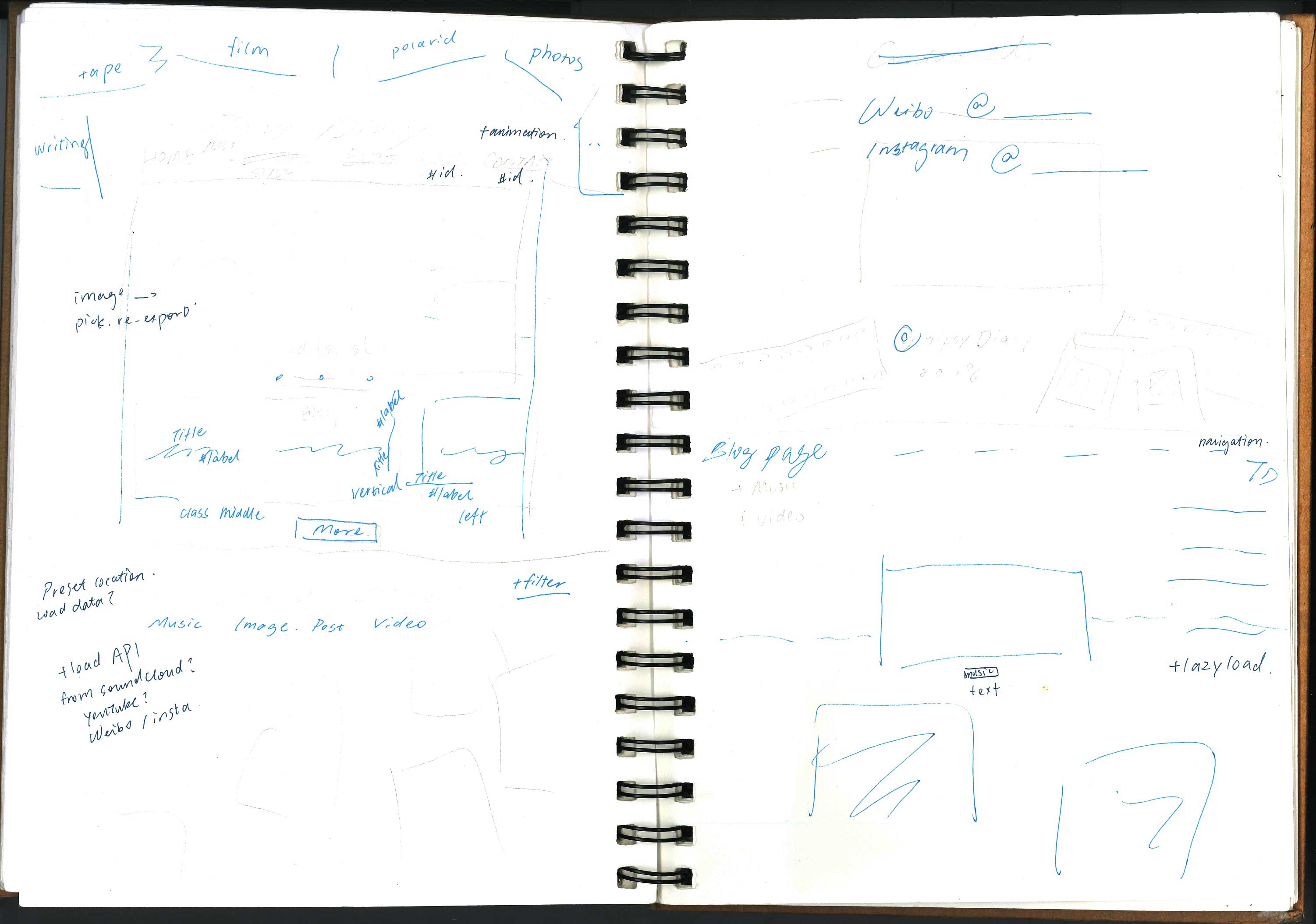 Here is the sketch that I follow through my entire process of making the site. Not all of the features were accomplished due to the time constrain. I also tried to clean up the way I load draggable elements and make a component, however, I seems like the transform function of these functions would stop working if I do that. Also I want to spend more time on figuring out what is the best way to load data for my blog. I want to make sure that I can easily create and load new data into the blog while having the ability to customize animation, style and interaction. I will be looking into contentful shortly after the finals craziness.

I highly value the feedbacks that I get from the class. I am seriously considering Leon’s suggestion of putting the draggable mood board as the focus and concept of the entire site and I will consider adding P5 input into the mood board as well.

Project Codes can be found here!

1,  As a user, you can create different albums to collect different series of Polaroid pictures

2, As a user, you can rename these albums as the event/time/location and it will be saved as the uploading page

3，As a user, you are able to upload your digital copy of your Polaroid pictures from your local storage

4, As a user, you can drag and drop any of the pictures from your albums to create your preferred way to present your Polaroid pictures

I am personally a huge fan of Polaroid pictures, I have tons of them as my precious documentation of memory and experience. However, I suffer from bad Polaroid management. And I regretted so much once I lost one of my favorite Polaroid pictures. The same story happened to my friends as well. Polaroid as a specific type of photograph, due to its size, texture, and portability, it is highly likely to be lost.

Also, it is difficult to well-characterized them unless you intend to do so. Meanwhile, the digital albums do a great job in organizing imageries.

So my primary goal is to create a platform dedicated to keeping and organizing Polaroid pictures for myself to secure my special moments and also allow more creations within the platform. 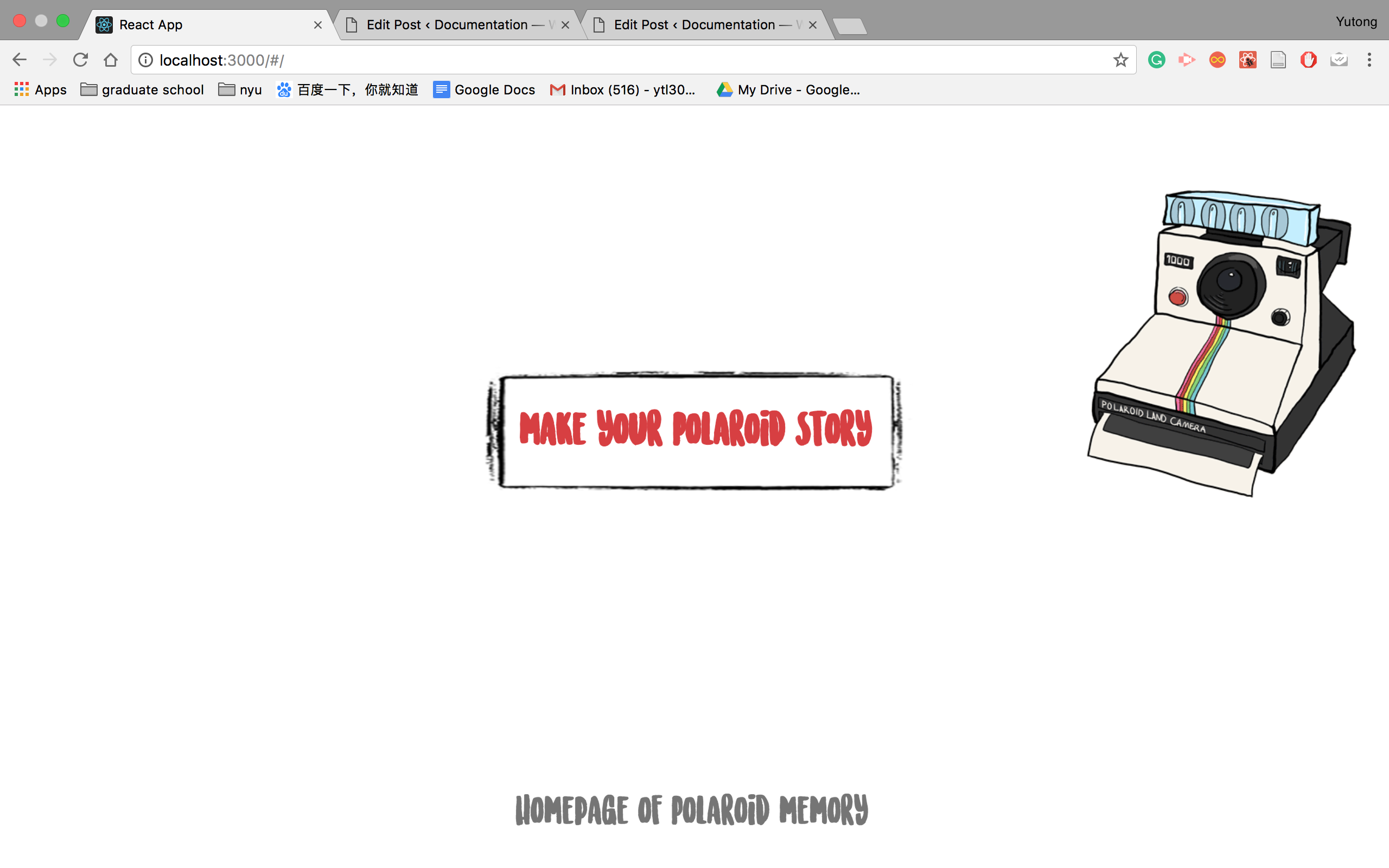 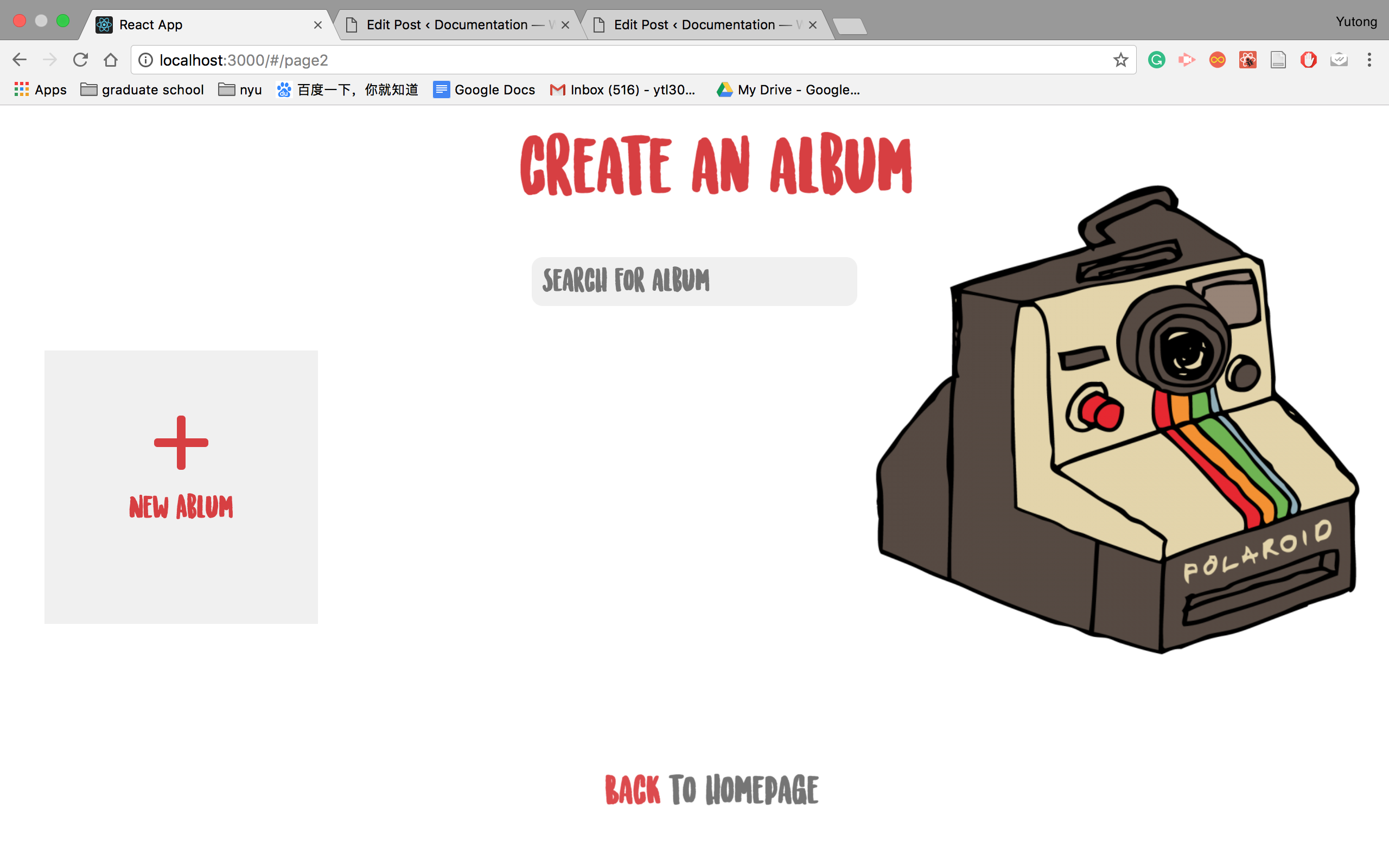 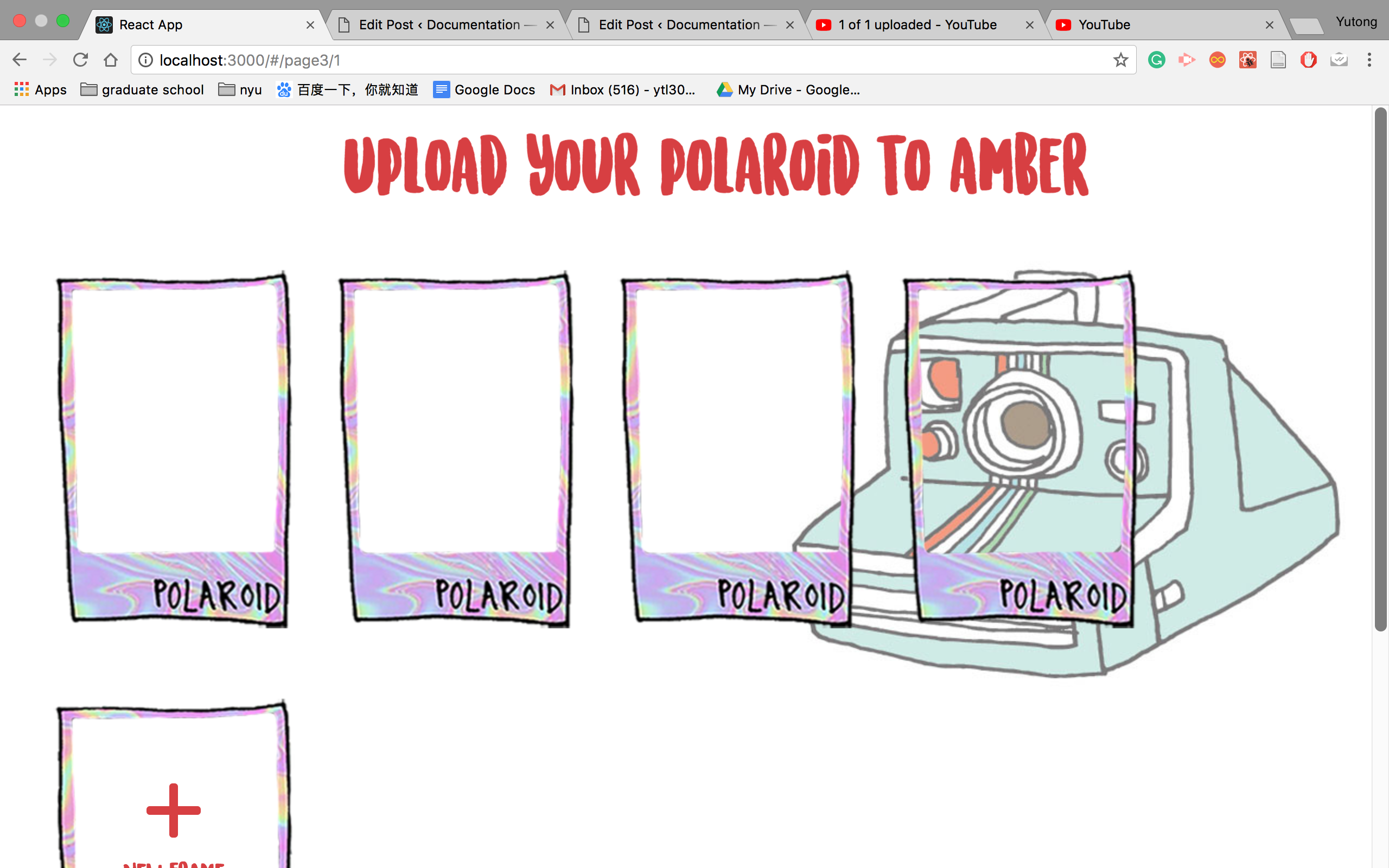 The original sketches from Adobe XD: 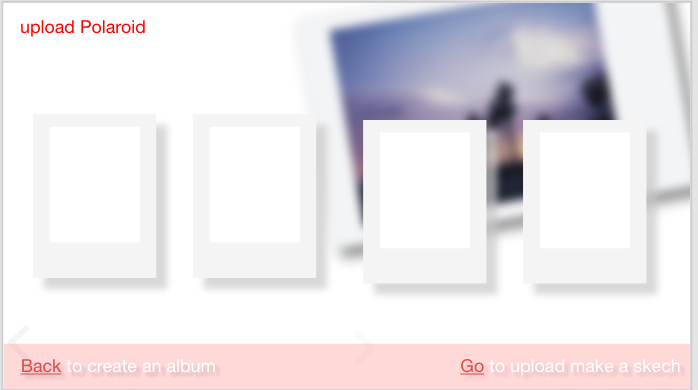 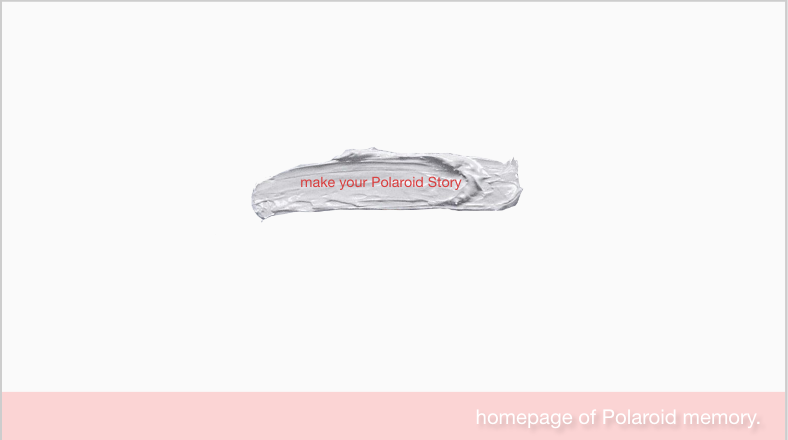 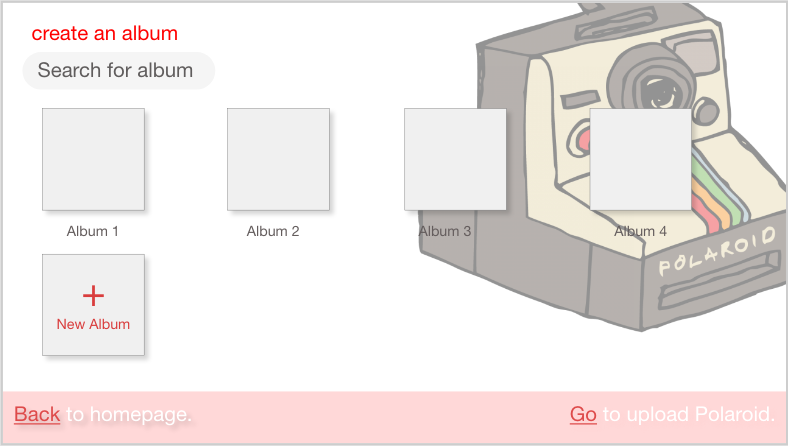 I revised my design a couple of times to make it consistent, I chose a cartoonish and hand-writing style to go with finally. It was meant to be more personal and colorful to myself. To be consistent involves concerns about fonts, font size, typography, visual assets…I realized my original version is mixing up a lot of styles. Also my midterm as well…

I think I got a little sense about the meaning of “say less about more” in UI design. And I wish to learn more about the design principles in the future.

I also learned using global CSS in index.js to initialize CSS properties and reusable components, which saves me a lot of time!

I think the digital and analog photography does have a difference in terms of the tangibility and visual features of them.

And today’s critique really helped to extend my point of view on a digital platform of an analog photography. I wish to further incorporate the physicality of some of the key features of Polaroid pictures, including the special visual taste of Polaroid pictures, the aging color in time…to open up potentially more possibility and functionalities of my little lovely web application.

My final project is a react-based data visulaization/interactive documentary on the topic of Hungarian politics, that uses 28 years of parliamentary records to assess and inform about the career of the current Hungarian prime minister.

If I wanted to focus on barely the React.js part of my capstone (that I am submitting as my final), I’d say that I successfully took advantage of the basic react structure taught in the first half of this class, as well as many of the optional material from the second half. 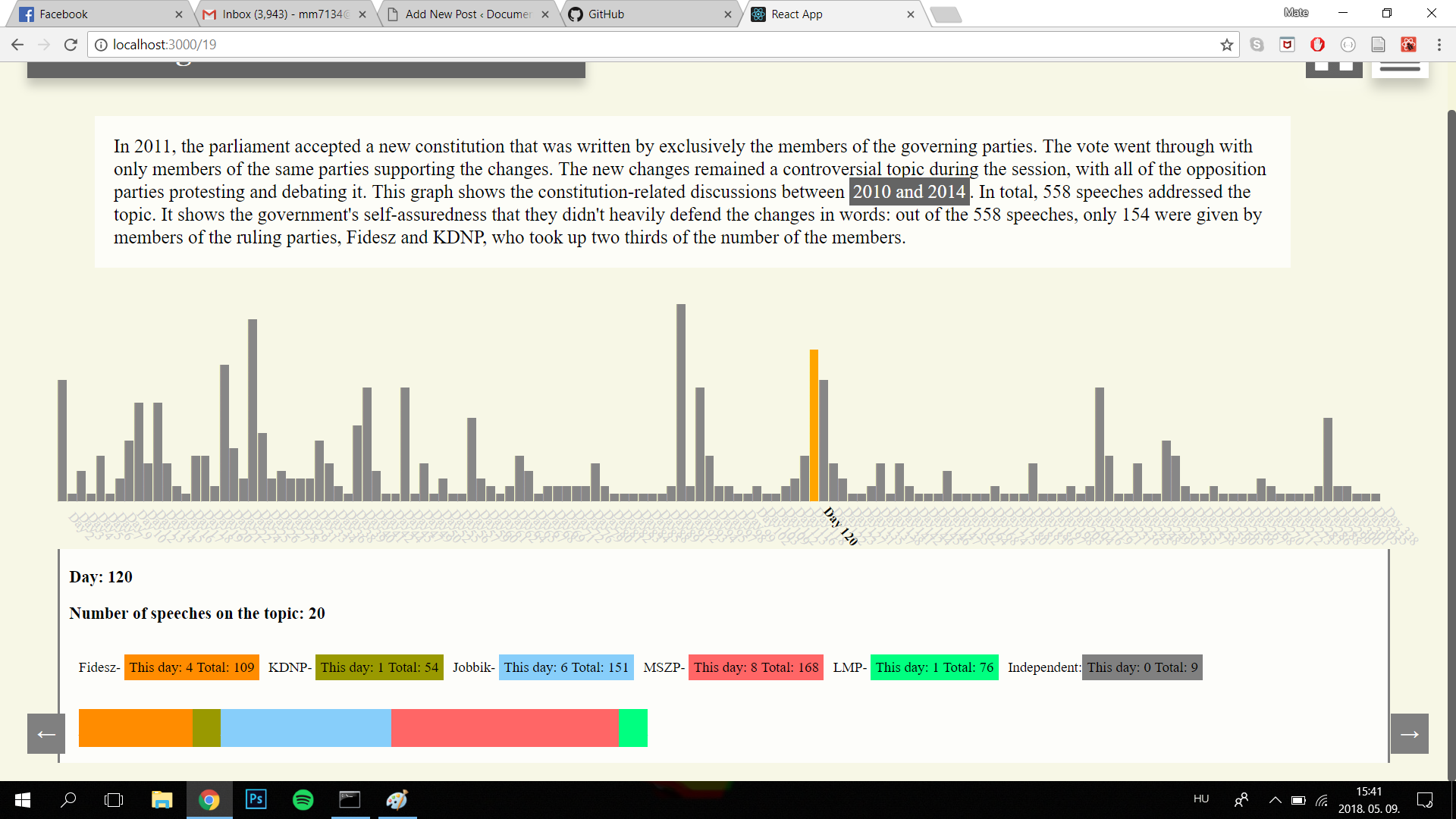 The whole structure of the website is based on react router, and each page sources data from a json file. It also loads additional databases into the App, that it passes down to the appropriate Page. The underlying structure, as well as the additional components I used for visualizations have been in place from the beginning, although they have been modified and refined through the process in order to fit more with the data and the design and to be able to accomodate additional information without making the interactions harder.

To sum up, content and componentwise it has been a smooth sailing. I kept in mind my influiences, such as NYT’s High Rise documentary, but I strived to achieve an original, eclectic format that best suits my message and data. In that, I believe I was successful. Most of my user-testing was centered around design (funcionality-wise, for the most part I received assurance in most of my intial ideas, and only a little tweaking was needed), since in the beginning I did not have any clear ideas as for how to use colors and shapes in order to best fit my content. After rounds and rounds of tests and asking for opinions, I believe that I have managed to implement if not the best possible, but an adequate and passable design to my project. 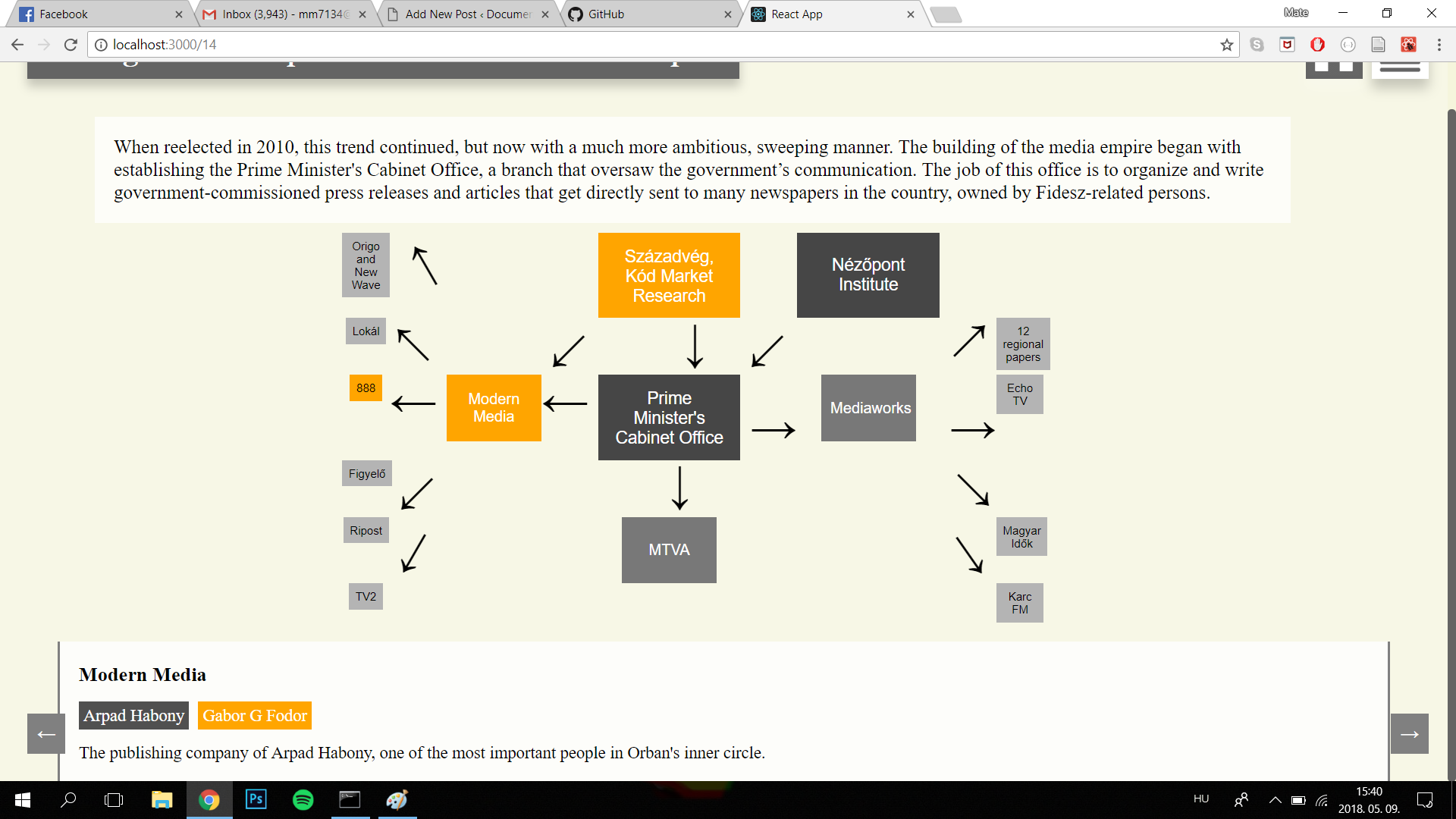 Most of my possible next steps concern expansion of content, videos and visualization types. As far as strictly the react part, I am planning to revise and polish the list of contents, and tweak the typefaces in a non-significant way. Refining my CSS-transitions is also a considerable possibility.

Hopefully some of those steps will have been made by the time I submit my capstone documentation, but I believe that the project in its current form satisfies every requirement for the assignment for this class. 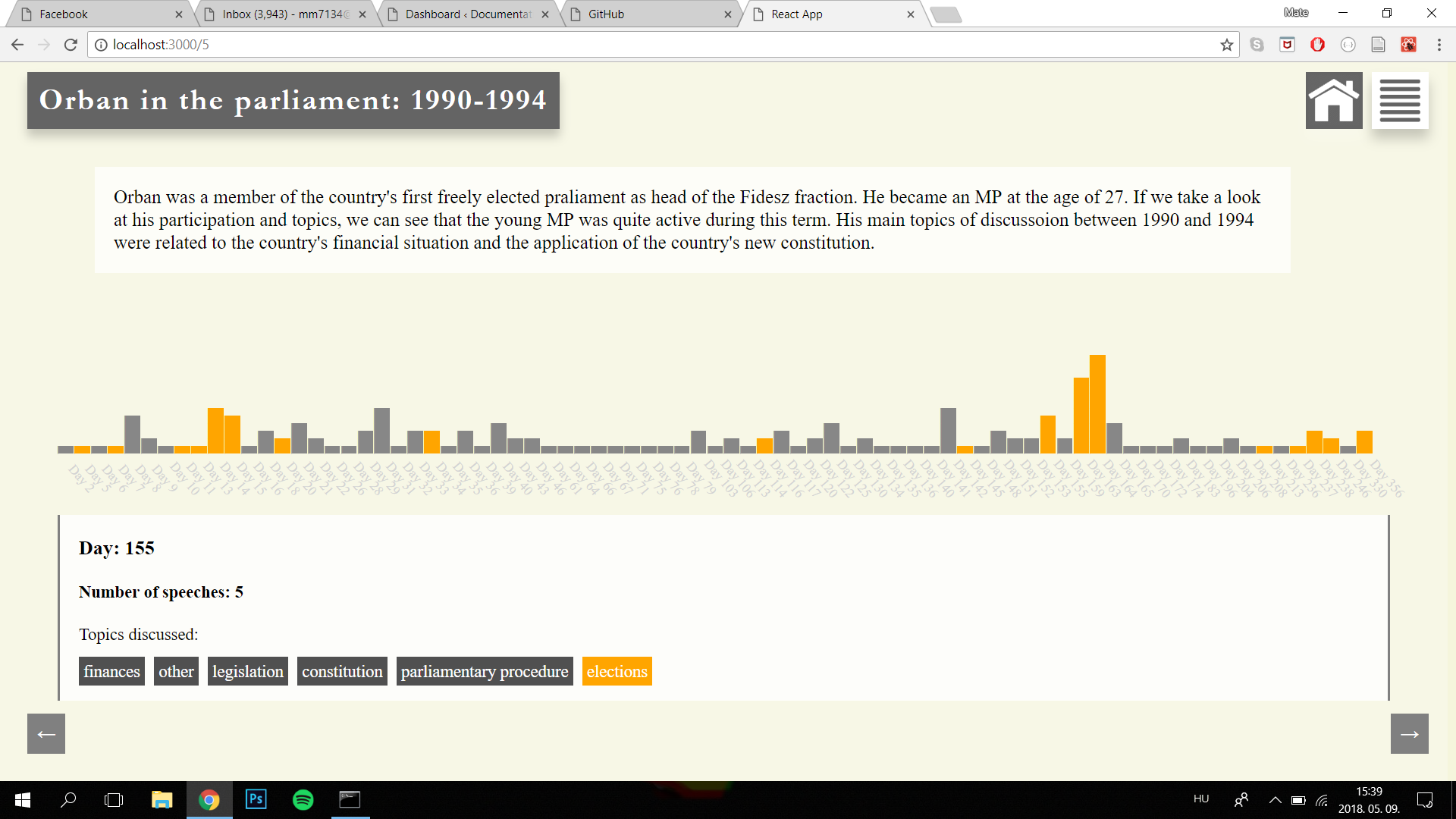 The portfolio is online! Check here.

The github ripo is here.

I also documented the project on my own react app as part of the project. You can check here or click “more” to read the content below. 🙂